An atmosphere of fear engulfs the nation... It’s time to stem the rot

We live in times when minority prayers are unceremoniously disrupted by right-wing activists of Gurugram in our own backyard. 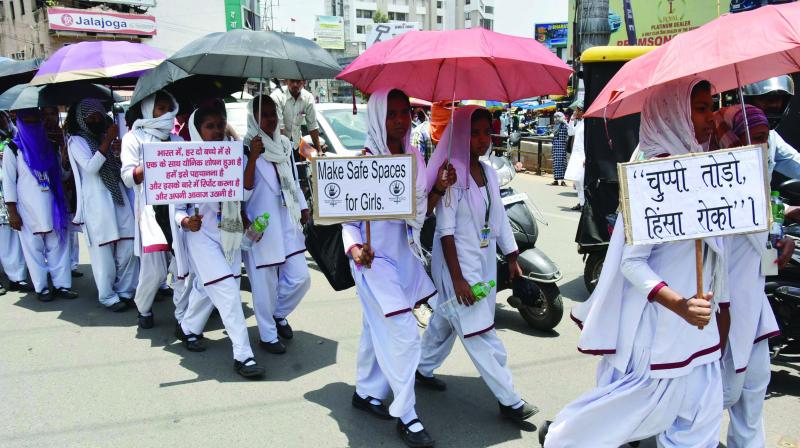 School girls hold placards during a silent protest rally against the recent rape cases of two teenage girls in the Chatra and Pakur districts of Jharkhand, in Ranchi. (Photo: AFP)

8.30 am, April 30, Near Film City, Noida. Cars are zooming towards the expressway.

No one has time to stop and think. Near a ramp leading to the tollbooth, a motorcycle lies sideways... Its rider is in the bushes, on his hands and knees.

The bike has skidded in the middle of the road; its rear wheel is spinning freely in the air. As the rider rises to his feet dazed a wiry thin man, who has just emerged from the car that had hit him, walks up to him and shoves him back into the bushes.

More men join him and the thrashing begins. A friend was on her way to Noida had witnessed this while talking to me on the phone. Other cars slowed down but they were unaffected and drove away. My friend did the same.

“Send me the details of the exact location, I will tweet about it and tag the Noida police,” I said.

“No don’t,” he said. “You never know these days what the repercussions of a tweet can be,” he added. “God only knows who those goons were and on whose behest they were acting. I don’t want ulcers worrying about you getting ambushed for being a tell tale.”

I did not tweet about it; I wasn’t there to witness the gunda-gardi it got me thinking and I was deeply disturbed.

There is a morbid sense of fear all around us. It weighs like a shroud over us. We are afraid to talk and are petrified of writing, particularly if we want to express some displeasure over the current dispensation.

The fear of serious repercussions is so great that people are even afraid of associating with those who are liberal in their thoughts. They don’t want to be targets of negative attention from those who rule.

Bullying of all sorts is rampant. Fledgling companies and small businesses are reeling under the crushing weight of the government’s economic and fiscal reforms. The new rules are draconian and these entrepreneurs work in the shadow of fear — the ghoul of the tax authorities will hound them relentlessly. It does not matter that the government will allow an easy passage for defaulters like Nirav Modi and his ilk.

“So much more tax to be paid. What will we earn? There will be hell to pay for. We will get notices. We will be harassed. What about all those people who have pilfered away lakhs of crores and fled to sunny beaches and fashionable world-class cities? Why hound us? Unleash your wrath on the likes of Nirav Modi,” spoke a young entrepreneur disheartened. She is worried about losing her business because of the Goods and Services Tax. Her clients are not willing to pay more and the GST takes away a huge chunk of her earnings. She will not manipulate the system; she is honest.

The fear is all pervading. Anybody with the tag of bhakt, RSS, Bajrang Dal and the sort are not to be angered. They unleash their hate for the liberals, unmindful of time and place. Narendra Modi bhakts walk around belligerent aggressive and rude, intolerant of any point of view but theirs.

TV anchors flare their nostrils, smoke billowing out of them when they pontificate at the behest of the government. Sanctimonious and insufferable, they only incite disgust in the thinking populace, audience. Clearly most channels have been bought out and honest reportage has been discarded unceremoniously. The fourth estate is only hate mongering and is instrumental in spreading rumours and lies. It incites divisive thought and thrives on innuendo.

Institutions, which were hitherto sacrosanct, have been defiled. Even the Election Commission for instance has its classified information reaching BJP president Amit Shah even before the details are formalised and announced.

It brings to the mind the righteous terror unleashed by former EC T.N. Seshan, who had brought such discipline and transparency to the rlection commissioner’s office.

Who then is worthy of such respect now? When the highest institution of our land, the Supreme Court, has not been left untarnished and is being splashed with hues of greys and blacks. The Justice Loya story will be a tough one to wash off its once pristine walls.

The most heart-breaking story came from another conversation. We were at a writer’s workshop in a school in Uttar Pradesh. One of the participants was a Muslim boy. He wrote a touching story about a devout Muslim young man who went to the Middle East to earn a living, leaving his wife in the care of his family. He discovered sadly, that his own family had been cheating him. So he returned to India and took the help of some of his childhood best friends who were people of the Hindu faith. A refreshing tale indeed, but an isolated incident that warms our hearts in these times.

Such is the vitiating atmosphere in the whole country, that even a little ray of light tells us there is indeed light at the end of the tunnel.

We live in times when minority prayers are unceremoniously disrupted by right-wing activists of Gurugram in our own backyard.

This blatant perpetration of communal violence indicates a complete disregard for the law and the belief that they can come to no harm is terrifying.

Yes, there is a deep-rooted fear psychosis, and we need to stem the rot before it takes us down.