A Pakistani flag can seen fluttering atop the post and a voice can be heard, saying the target has been hit successfully. 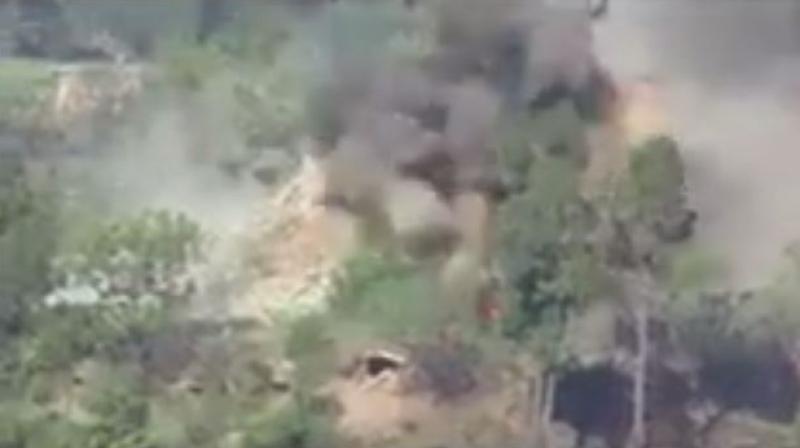 Reports said that a Sikh regiment unit of the Indian army destroyed a Pakistani bunker near the LoC in less than 60 seconds. (Photo: Videograb)

New Delhi: A 1.41-minute-long video showing Indian soldiers bombarding Pakistani bunkers with anti-tank rockets and heavy ammunition that has gone viral predates the May 1 incident where two Indian soldiers were beheaded by a Border Action Team (BAT) of the Pakistani Army, official sources told this newspaper.

“The video’s date is before the May 1 incident,” the sources said, dispelling the notion that it was retaliatory action undertaken by the Indian forces in response to the May 1 mutilation of two Indian jawans along the LoC in Krishna Ghati sector of Poonch in Jammu and Kashmir.

Moreover, in the Krishna Ghati area, the Pakistani posts are situated at a height higher than the Indian posts whereas the video shows the Indian shelling at posts located slightly lower in altitude. TV channels, while playing the clip, said the video related to a counter-offensive by the Indian Army, targeting the Pakistani border posts a week after two Indian soldiers were beheaded there.

A Pakistani flag can seen fluttering atop the post and a voice can be heard, saying the target has been hit successfully.

India had vowed to take revenge for the “barbaric” mutilation of the bodies during the well-planned BAT raid. Naib Subedar Paramjeet Singh and BSF Head Constable Prem Sagar were shot down in an ambush and their bodies beheaded by the BAT after sneaking 250 metres into the Indian territory.

A former Army officer Brig Anil Gupta, who has served in the 16 Corps headquarters in Nagrota, has told agencies that it cannot be Indian Army’s retaliatory act at all but a local LoC defence strategy.

It was a day after his deputy vice-chief of Army Staff Sarath Chand had said: “I do not want to say what we will do. Instead of speaking, we will focus on our action at a time and place of our choosing”.