India   All India  09 May 2017  Participate in Hackathon: EC to AAP after EVM demo; party accepts challenge
India, All India

Give us your EVMs, it can be tampered with in 90 secs, Kejriwal tells EC. 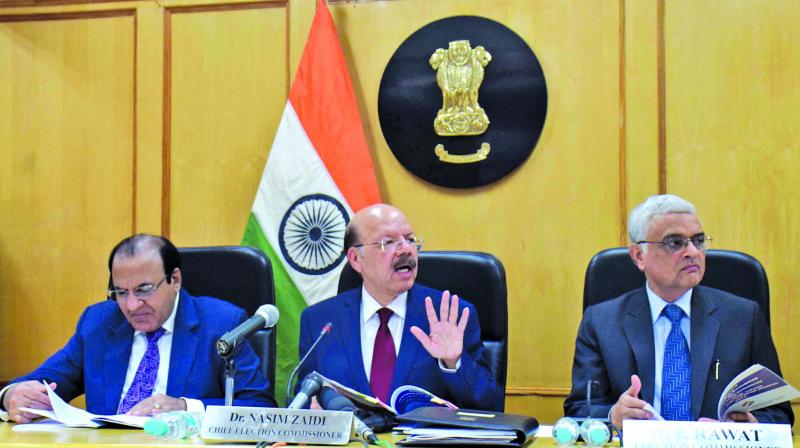 The EC has been claiming that EVMs are tamper-proof and had challenged that it be proven otherwise by parties making allegations about rigging. (Photo: PTI)

New Delhi: Responding to the Election Commission's dismissal of the Electronic Voting Machines (EVMs) being tampered, Delhi Chief Minister Arvind Kejriwal on Tuesday said the former should hereafter provide their own EVMs.

"I would ask the EC to give us their EVMs, if it is not tampered. We can change the motherboard in 90 seconds," he said.

It further rejected the claim today of the Aam Aadmi Party that its EVMs can be hacked, saying the machine hacked in the Delhi assembly was a 'look-alike' gadget and not an actual equipment used by it.

"It is common sense that gadgets other than ECI-EVMs can be programmed to perform in a pre-determined way, but it simply cannot be implied that ECI-EVMs will behave in the same manner because they are technically secured and function under
an elaborate administrative and security protocol," the Commission said in a statement.

The 'so-called' demonstration on 'extraneous and duplicate gadgets' which are not owned by the EC "cannot be exploited to influence our intelligent citizens and electorate to assail or vilify the EVMs used by the Commission in its electoral process, it added.

This comes after AAP MLA Saurabh Bharadwaj earlier in the day at a special assembly session of the Delhi Assembly demonstrated how EVMs can be manipulated.

According to NDTV, the Election Commission dared AAP to participate in its upcoming ‘Hackathon’, which will be held at the end of May.

NDTV quoted EC sources as saying that when confronted with a ‘genuine’ voting machine, Kejriwal’s party will fail at proving it can be tampered. However, AAP in response said it was ready to take up the EC’s challenge.

Bharadwaj showed how simple it was for an engineering graduate such as himself to rig a voting machine, and challenged scientists to prove him wrong.

AAP convenor Arvind Kejriwal had blamed the party's loss in Punjab to the rigging of voting machines. Bhardwaj, who told the assembly that he had a BTech degree in computer science and that he had worked on microprocessors and micro-controllers, said, "An ordinary engineering graduate like me can manipulate an EVM by working on it for just 10 to 15 days."

Conducting a mock poll on an EVM machine, Bharadwaj demonstrated how despite giving two votes each to various parties, the final count showed that the votes of some parties had been transferred to one party.

He said this was possible with a secret code that is assigned to every constituency. Bhardwaj claimed that before voting begins, the election officials show that everything is done fairly but after 10 am, they activate the code, which ensures that all votes cast thereafter would go to a particular candidate.

"All it takes to rig an EVM is to change the motherboard. All it takes is 90 seconds. It's outrageous," Bhardwaj said, explaining that a 'manipulator' enters the polling booth early into voting and enters a unique secret code that ensures that all votes polled thereafter that would go to a selected candidate.

The Election Commission has been claiming that EVMs are tamper-proof and had challenged that it be proven otherwise by parties making allegations about rigging.

She had pointed to the BJP's vote share in Muslim majority areas to substantiate her argument that that it would not have been possible for the saffron party to get that many votes in those areas, if not for EVM fraud.