Singh made it clear that India was ready to hold talks with Pak provided Islamabad 'commits' to take steps to stop terrorism. 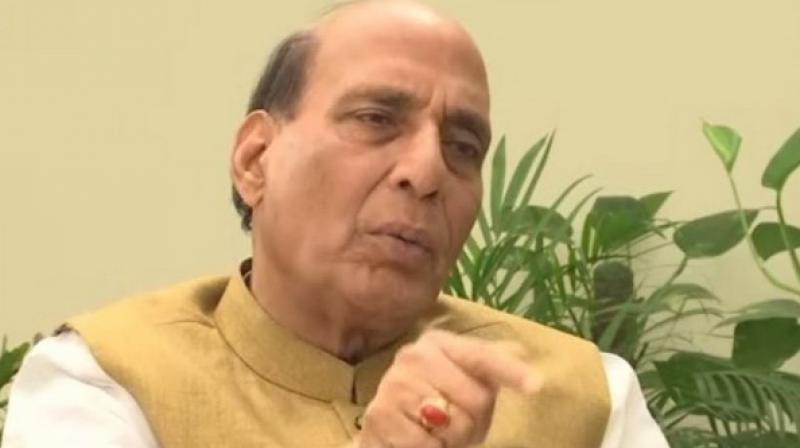 New Delhi: Home Minister Rajnath Singh on Tuesday said that India conducted action on the Pakistan-based terror training camp in Balakot on February 26 with utmost caution and responsibility to ensure only terrorists were impacted and no civilian was harmed.

In an exclusive interview to ANI, Rajnath Singh underlined the fact that India had no intention to cause civilian casualties or get into direct confrontation with Pakistani forces while carrying out air strikes on Balakot.

The Home Minister's remarks come amid heightened tension between New Delhi and Islamabad following February 14 Pulwama terrorist attack by Pakistan-backed Jaish-e-Mohammad terrorist on a security convoy in which 44 CRPF personnel were killed.

The two countries were close to having dangerous confrontation following Balakot airstrikes of February 26, when the Indian Air Force aircraft crossed the Line of Control to attack the JeM base camp in Khyber Pakhtunkhwa province of Pakistan.

On being asked, how correct it is to demand proof from armed forces about the air strikes, Rajnath Singh said: "Why should one ask for proof from IAF, who bombed the terrorist centre only. Should they count the bodies and give proof? As a Home Minister of the country I am saying that the operation in Balakot took place on the basis of credible intelligence input."

When asked that the international community is still not accepting India's stand that Pakistan used F-16 to attack Indian Air Force, Rajnath Singh said: "No international community has denied it. Pentagon itself has contradicted it. They have denied any reports (published in Foreign Policy magazine) and said no research was done and no US general has made these comment."

"In addition to that Air Vice Marshal have presented all the proof yesterday that Indian Air Force has downed Pakistan F-16 during a retaliatory firing," he added.

The Home Minister also made it clear that India was ready to hold talks with Pakistan provided Islamabad "commits" itself to take strong steps to stop terrorism emanating from its soil.

"Whosoever will come from Pakistan, we are ready to talk. But Pakistan has to decide that terrorism and talks cannot proceed together. Pakistan has to commit that it will stop terrorism, and that they will not allow anyone to use their soil to train terrorists," Rajanth Singh said.

On asking for proof of Balakot strike:

Singh said that it is fair to raise questions in a democracy and there is no harm in asking for details or proof from a government with regard to actions taken by it but it is unfair to ask security forces to give proof.

While responding to a question of why people are branded as "anti-national" and "Tukde Tukde" gang, if they ask for proof of Balakot air strike and Surgical strikes, the Home Minister, said: "No one is termed anti-national for asking questions, we always give answers to relevant questions...Why should one ask for proof from Indian Air Force, who only bombed the terrorist centre. Should they count the bodies and give proof?"

He added that the air strike by the IAF in Pakistan's Balakot took place on the basis of credible intelligence input. "During Balakot air strike, the IAF targeted terrorist training centres in Pakistan and ensured that no harm is done to civilians there. We took precautions while taking revenge of Pulwama terror attack, we made sure that Pakistan's Sovereignty and Integrity is not compromised and only terrorists are targeted. We did not attack Pakistan's army or harm the innocent civilians, we only targeted terrorists," he said.

Rajnath Singh asserted that “Kashmir is, was and will always be an integral part of India and thus it cannot have its own prime minister.”

"Kashmir will never be separated from India. Kashmir was, is and always will be an integral part of India. There cannot be two prime ministers in the country. It is absolutely clear in our election manifesto that if we form government Article 370, Article 35A will be removed," he added.

When questioned about Mehbooba Mufti and Farooq Abdullah’s statements that tampering with Article 370 and 35A will not bode well for India, Rajnath said, “This is their frustration, let them speak what they want, we will go ahead and do what we have to do”.

Rajnath Singh further explained that during his tenure as the Home Minister he tried continuously to hold dialogues with Kashmiri leaders, who showed no inclination for talks.

On I-T, ED raids on Opposition leaders and their aides

Rajnath Singh said that the agencies are autonomous bodies and they are acting on their inputs.

Singh said, “The agencies which are conducting raids are autonomous bodies. Model Code of Conduct does not apply to them. They are acting on their inputs. How can we stop them?”

“It is unfair to hold the government responsible for the raids. This is an ongoing process. Agencies act on their own intelligence inputs,” the Minister said.

Singh maintained that autonomous central agencies will take necessary steps to stop the use of unaccounted money in the elections.

The Home Minister said, “The elections should be fought in a free and fair manner. No unethical means should be used to win the elections. If anyone has collected unaccounted money and wants to use them in elections, these autonomous bodies will act,” he said.

“We do not send forces on our own. We send them on the instructions of the Election Commission of India. The Centre has nothing to do with it and the central forces are deployed in states on EC’s orders,” Singh added.

Rajnath Singh said that politics should not be done on the basis of "caste, creed and religion".

On promises made by BJP

Rajnath Singh said that the BJP never made promises of transferring Rs 15 lakhs into people's bank accounts during the campaign for Lok Sabha election in 2014.

His statement comes at a time when opposition parties have been criticing the BJP for having made “false promises" to woo the people of India ahead of 2014 general elections and now repeating it in 2019.