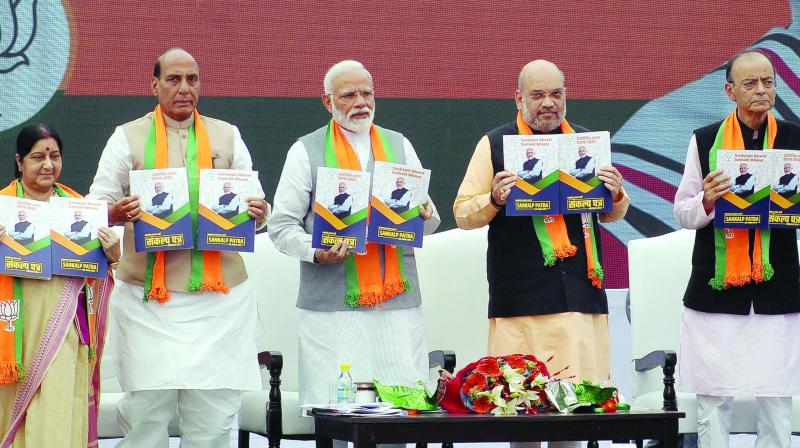 New Delhi: Balancing populist welfare initiatives with muscular nationalism, the ruling BJP on Monday released its manifesto for the high-stakes Lok Sabha polls promising pension to 15 crore marginal farmers and small shopkeepers to counter the Congress’ minimum income scheme, while vowing to extend Assam’s National Register of Citizens (NRC) to the entire nation to push out infiltrators and show zero tolerance to terror.

While sharing its vision to make India a $5 trillion economy by 2025, the saffron party also reiterated some of its unfulfilled promises — construction of Ram temple in Ayodhya and scrapping of Article 370, 35A dealing with Jammu and Kashmir’s special status. Zero tolerance for terrorism and strengthening of defence forces also found special mention.

With the manifesto tagline “Sankalpit Bharat, Sashakt Bharat”, the BJP promised to deliver on 75 promises by the 75th year of Independence in 2022 and pave the way for making India a developed nation by 2047 — the 100th anniversary of Independence.

Uniform Civil Code, Sabarimala and refined version of the “garibi hatao” initiative and good governance formed the core of the 50-page document which made 93 promises on 12 subjects.

Releasing the manifesto, called “Sankalp Patra” (Document of Resolve), at the party headquarters, Prime Minister Narendra Modi said, “Nationalism is our inspiration, empowering the poor is our philosophy and good governance is our mantra.”

“Our ‘Sankalp’ (resolve) is to change India from a developing country to a developed country… We want people to hold us accountable. Hence, we have set out 75 goals to be achieved by 2022,” he said.

That all was not well between the BJP’s veterans and the existing team became evident as most of the party veterans, including L.K. Advani and M.M. Joshi were missing from the event.

Mr Shah later met both of them. Mr Joshi, who has been seething over denial of parliamentary ticket. Incidentally, Mr Joshi was heading the manifesto committee of the party in 2014.

The emotive issue of Ram Mandir also featured in the poll document along with a vow to eliminate triple talaq and nikah halala.

Ram Mandir featured on top of the “cultural heritage” section of the BJP manifesto with the party reiterating its stand and exploring “all possibilities within the framework of the Constitution and all necessary efforts to facilitate expeditious construction” of its in Ayodhya. Kerala’s hill shrine Sabarimala also featured in the section with the party promising to “endevour to secure constitutional protection on issues related to faith and belief”.

Development initiatives also featured high in the poll document with the BJP promising to continue its policy of lowering tax rates. Promises for the youth, rural and agriculture sector and women also featured prominently.

The document had a special chapter on “Nation First” and the word “national interest” featured a number of times in the manifesto. This section of the document mentioned post-Uri incident surgical strike and the Balakot airstrike and “zero tolerance” against terrorism. The BJP also assured giving a free hand to the security forces to combat terrorsim and said the purchase of defence equipment will be fast tracked to strengthen the armed forces..

The sops for farmers and traders seem aimed at undoing the damage done to the party’s prospects by peasant unrest as well as resentment among small traders and shopkeepers over demonetisation and GST.

The party also promised that it will make farm loans up to Rs 1 lakh interest free for 5 years and invest Rs 25 lakh crore in agriculture sector and reiterated its resolve to double farmers’ income by 2022.

Looking to boost self-employment, the BJP promised a new scheme to provide collateral-free credit of up to Rs 50 lakh for entrepreneurs, with 50 per cent of the loan amount for female entrepreneurs.

Mr Modi said the BJP’s manifesto is a “multi-layered and multi-dimensional” document that addressed the expectations and aspirations of all sections of the society. He said while India lacked in its preparations for the 21st century, it should pledge that in 2047 it should become a developed nation and said the years from 2019-24 could become the foundation for laying a roadmap for achieving the pledge.

Mr Modi said, “We are a nation that is daring to dream and dreaming to dare” and that there is a “hope and a spirit of aspiration among the youth”.

On the economic front, the BJP said it aspires to make India the third largest economy of the world by 2030.

The party promised that it will continue with the simplification of the GST process by engaging in dialogue with all stakeholders.

Terming the Lok Sabha polls as “an election of people’s aspirations”, Mr Shah said that the Modi government has changed the scale of thinking as promises are not made for a limited section of people but for everyone.

On the social front the party promised pucca houses for all by 2022, with cooking gas and electricity connection. The party also vowed to provide 80 crore poor people sugar at Rs 13 a kg. On the health front, the party promised 1.25 lakh new health centres and medical colleges in each district of the country.

The poll document targeted building “next generation” infrastructure, including gas and water grids, regional airports and wayside amenities along national highways. The party also promised to launch a slew of initiatives which include “Jal Jivan Mission” under which a special programme — “Nal se Jal” — will be introduced to ensure piped water for every household by 2024, while the Bharatmala 2.0 project will support states to develop road networks connecting the interior regions to the main roads and “effectively leverage the economic potential and market opportunities of the region concerned”.

Looking to win over the salaried middle class, the party said it is committed to further revise the tax slabs and tax benefits to ensure more cash and greater purchasing power in the hands of families.

Reiterating its commitment to repeal Article 370, which gives Jammu and Kashmir a special status, and Article 35A, which allows the state’s legislature to define permanent residents, the BJP pledged to work towards ensuring return of Kashmiri Pandits to the valley.

The BJP also promised financial assistance for the resettlement of refugees from West Pakistan, Pakistan-occupied Kashmir (POK) and Chhamb.

Underscoring its commitment to enactment of the Citizenship Amendment Bill, on which it was forced to go slow following widespread opposition from Northeast states, Mr Singh said the bill is necessary for protection of individuals of religious minority communities from neighbouring countries escaping persecution.