Senior Congress leaders Kamal Nath, Sheila Dikshit, PC Chacko, Ajay Maken were among the leaders at Rajghat, where fast is being observed. 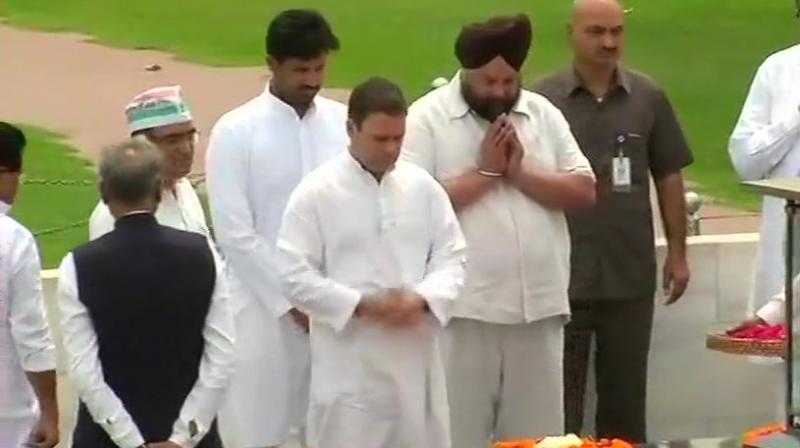 Congress president Rahul Gandhi arrives at Rajghat, where the Congress party is staging a protest and hunger strike over atrocities on Dalits. (Photo: ANI | Twitter)

New Delhi: Congress president Rahul Gandhi on Monday led his party in a nationwide daylong fast against caste violence, communalism and the non-functioning of Parliament, for which the UPA major blames the ruling BJP.

Congress workers are observing a daylong fast in all state and district headquarters to voice their protest against the BJP government and to promote communal harmony and peace across the country.

Party leaders Sajjan Kumar and Jagdish Tytler, both accused in the 1984 anti-Sikh riots, were asked to not sit on the main stage at the protest venue when Gandhi was about to arrive, party leaders said.

Kumar left the venue immediately after he was told about it. Surjewala was quick to hit out at the BJP over the controversy.

"Some conspirators in BJP see meaning in everything,” he added. Tytler and Kumar are charged with having a role in the riots in the aftermath of prime minister Indira Gandhi's assassination by her Sikh bodyguards on October 31, 1984.