‘King of Alwar’ ready for battle of Kalinga

Jintedra Singh will have to address infighting that has weakened Congress. 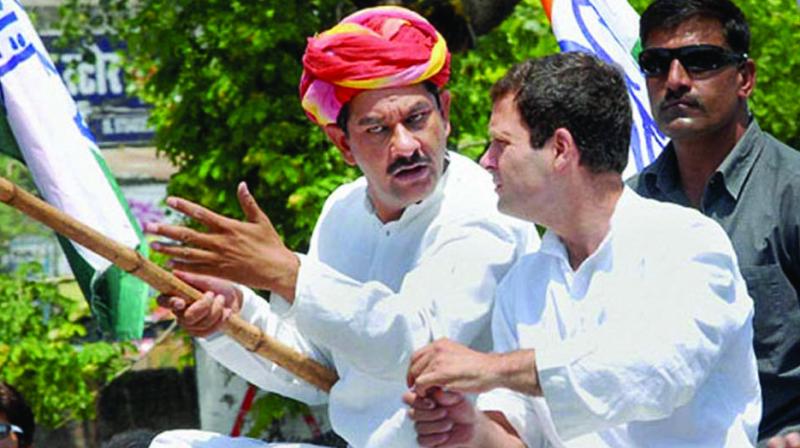 Bhubaneswar: Former Union minister and Congress leader Jitendra Singh, who will fight against chief minister Naveen Patnaik in the 2019 Assembly polls, has the task of rejuvenating a party that seems to be fast losing relevance following a string of poor performances in various electoral exercises.

Internal bickering and factionalism in Odisha Pradesh Congress Committee (OPCC) and lack of coordination between the Congress Legislature Party (CLP) and OPCC have made the party virtually a non-player in state.

Mr Singh, whose grandfather Tej Singh Prabhakar Bahadur, was the last reigning Maharaja of Alwar (1911-2009), will have to counter infighting in the party.

Having ruled Odisha for nearly four decades after Independence, the party is now struggling at the third spot in the Odisha politics.

Shunted out of power in 2000 by Naveen Patnaik-led Biju Janata Dal (BJD), the party doesn’t seem to be making any effort to come back to its position of preeminence. In the past four years, the party has failed to organise protests against the ruling BJD government that faces multiple scams and scandals.

While the BJP, the erstwhile ally, tirelessly built its image as the BJD’s answer to Odisha, the Congress leaders are busy in sniping against each other thus weakening the party.

Prasad Harichandan, who was given charge of the OPCC after the Congress’ humiliating defeat in 2014 Assembly elections, has never got the cooperation of the CLP. The CLP wanted to replace Mr Harichandan by veteran leader Niranjan Patnaik, who on certain occasions participated in PCC-sponsored political programmes, sending wrong signals to the public that the party hasn’t learnt lessons from its defeats in Assembly and LS polls.

Frustrated with the Congress leaders’ behaviour, the voters for the first time pushed the party to the third spot in 2017 rural polls, enabling the BJP to become the main opposition in the state.

Though it was expected that the Congress leaders would bury their hatchet and put up a united fight for the Bijepur Assembly bypoll, it was not to be. Alleged sabotage by a section of Congress leaders resulted in the party failing to retain the seat it had held for the past three terms.

According political analysts, Mr Singh, the newly-appointed state in-charge, a key member of Congress president Rahul Gandhi’s core team, has to do a tightrope walk to carry along the warring factions and maintain a fine balance between the experienced veterans and youths.

The most daunting task before Mr Singh, however, is to bridge the widening gap between the OPCC and the CLP Besides, he has to check the mass migration of senior leaders to the BJD and Congress.

Over a dozen of senior leaders, including former Leader of the Opposition Bhupinder Singh, ex-Union minister Chandrasekhar Sahu and party spokesperson Sulochana Das, had joined the BJD.

The party got a major setback when Upasana Mohapatra, daughter of firebrand leader Lalatendu Bidyadhar Mohapatra joined the BJP, alleging that her father, who died of cancer, was not treated right in the Congress despite working hard for decades and making many sacrifices.

The initial response of various factions to Mr Singh’s appointment as Odisha in-charge was not bad.

Mr Patnaik, the former PCC president and bitter critic of Mr Harichandan, has whole-heartedly welcomed the appointment of Mr Singh.“I welcome the young and dynamic Mr Singh as the new AICC in-charge of Odisha. With his experience and guidance, Odisha Congress will attain greater heights,” Mr Patnaik wrote on his Facebook page.

Analysts decipher his welcome message as his desire to lead the party in case the AICC goes for change of guard in the state organisation ahead of civic polls this year.