Jagdish Tytler may have left Cong harmony programme on instructions

Tytler denied being asked to leave and said he was going to attend a meeting for MPs and ex-PCC presidents. 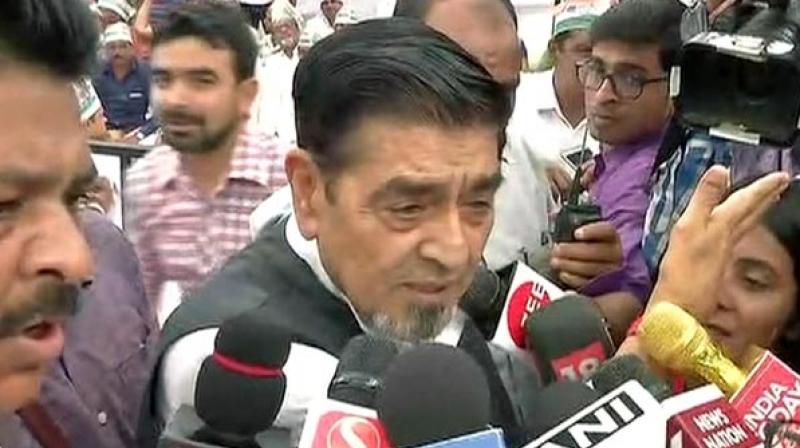 When reporters saw Tytler leaving the stage, then they questioned him whether he was asked to leave as one of the mottos of the programme was communal harmony. (Photo: ANI)

New Delhi: Senior Congress leader and accused in the 1984 anti-Sikh riot case Jagdish Tytler on Monday left the stage of a Congress programme at Rajghat.

When reporters saw Tytler leaving the stage, then they questioned him whether he was asked to leave as one of the mottos of the programme was communal harmony.

After that, Maken was seen escorting Tytler to few yards and coming back when Tytler left.

Tytler, who then sat with the Congress workers, later said nobody had asked him to leave the stage.

When asked what Ajay Maken told him, Tytler replied, "I asked him when will Rahul ji come."

Responding to another question, Tytler said perception about him will be corrected when the time comes.

When asked about the Sikh community's sentiment being hurt by Tytler, the 1984 Sikh riot accused Congress leader said, "If you come to my constituency and I will take you to every gurudwara, not a single Sikh. Only Akalis will speak against me as abusing me is their bread and butter."

The Congress party organised a nationwide "fast" to protest against the Narendra Modi government and non-functioning of the Parliament.

Rahul Gandhi led the protest at the Rajghat on Monday where he shared the stage with Ajay Maken and former Delhi Chief Minister Sheila Dikshit.