Delhi BJP leader Harish Khurana alleged that the Congress leaders were eating to their heart's content to prep for their daylong fast. 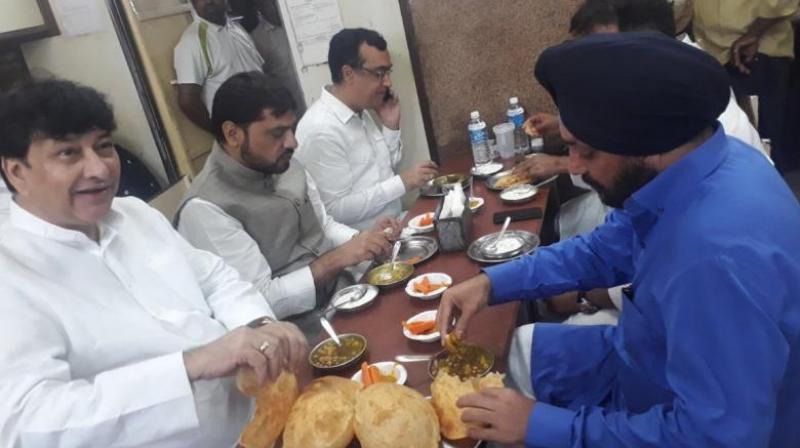 As the protest started, an image of Congress leaders including Ajay Maken, Haroun Yusuf and Arvinder Singh Lovely, gobbling down chhole bhaturas and other Delhi delicacies at a popular restaurant started doing the rounds. (Photo: ANI | Twitter)

New Delhi: The fast by Congress leaders led by party president Rahul Gandhi on Monday has been finding itself pulled into controversies. The protest at Mahatma Gandhi's memorial Rajghat in Delhi is aimed at promoting communal harmony and protesting atrocities against Dalits, Congress leaders said.

As the protest started, an image of Congress leaders including Ajay Maken, Haroun Yusuf and Arvinder Singh Lovely, gobbling down chhole bhaturas and other Delhi delicacies at a popular restaurant started doing the rounds.

The photo showed Arvinder Singh Lovely in the same blue shirt that he was seen wearing at the protest.

Delhi BJP leader Harish Khurana alleged that the Congress leaders were eating to their heart's content to prep for their daylong fast.

"Aren't we allowed to eat before 11 am?" snapped Congress leader Ajay Maken, who organised the protest.

Arvinder Lovely claimed that the photo was taken before 8 am and said, "This is symbolic fast from 10.30 am to 4.30 pm. It is not an indefinite hunger strike. This is what is wrong with these (BJP) people, instead of properly running the country, they concentrate on what we eat."

On Monday morning, there was a flutter over former Union minister Jagdish Tytler's entry to the protest venue. He and Sajjan Kumar, both accused of leading mobs in the 1984 anti-Sikh riots in the aftermath of Indira Gandhi's assassination, were reportedly asked to leave the stage where Rahul Gandhi was to sit.

Terming Rahul Gandhi's fast at Rajghat as a "farce", BJP described the Congress' decision to keep the 1984 anti-Sikh riots accused Sajjan Kumar and Jagdish Tytler away from the main dais as its "admission of guilt".

BJP spokesperson Sambit Patra ridiculed the opposition party's nation-wide fast against the alleged caste violence and communalism, saying its leaders had come to the Mahatma Gandhi's memorial to talk about non-violence but the presence of Kumar and Tytler exposed the party's "real violent" face.

"The Congress has fallen into its own trap. What we have seen from Rahul Gandhi today is not a fast but the farce of a fast. (It was) an attempt by his party to fast track his politics to burnish his credentials despite people rejecting him time and again," Sambit Patra told reporters.

The Congress was forced to ask them to leave and it was its admission of guilt, Sambit Patra said.

Taking a dig at Gandhi over his attack on the Modi government over Dalit issues, Patra asked if he had abstained even from one meal when anti-Dalit violence had happened in places like Mirchpur, Gohana and Jhajjar when the Congress was in power.

Citing figures of anti-Dalit violence in five years of the Congress rule in the poll-bound Karnataka, he said the state had reported 9,080 cases crimes against the community and over 358 Dalits were killed. Rahul Gandhi should tell them when he plans to sit on a fast against crimes against Dalits in Karnataka, he asked.

Another BJP spokesperson Bizay Sonkar Shastri raked up the Congress' alleged ill-treatment of Dalit icon Bhimrao Ambedkar and said it was Prime Minister Narendra Modi who had been working overtime to fulfil Ambedkar's dreams.

Erstwhile Prime Minister Jawaharlal Nehru had worked to ensure that Ambedkar lost his deposit in the first Lok Sabha elections, he claimed. While Dalits believed in peaceful protests, it is the opposition which had fanned violence, he alleged.

The Congress has been "jolted" by the Dalits' growing association of with the BJP, he said.

Patra and Shastri also quoted from Ambedkar's resignation letter to quit the Nehru Cabinet in which the Dalit icon had accused the erstwhile PM of devoting his time only for protection of Muslims. While Ambedkar was equally committed to protect Muslims, the Nehru government did not do much to protect Dalits and tribals; they said quoting from the letter.