Rajinikanth said that it was not a good idea to hold IPL matches in Chennai at a time when entire Tamil Nadu was agitating for Cauvery water. 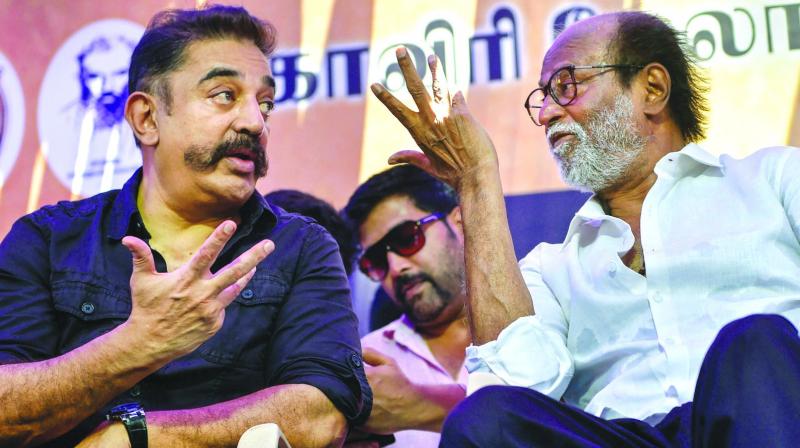 Actors Kamal Haasan and Rajinikanth at a protest in Chennai on Sunday in support of the ongoing agitation in Tamil Nadu for the constitution of a Cauvery Management Board. (Photo: PTI)

Chennai: Superstar Rajinikanth warned the Centre that it would have to face the anger of Tamil people if the constitution of the Cauvery Management Board is delayed further.

“The Supreme Court has firmly said that Cauvery Management Board should be formed. But the Centre is wasting time saying Karnataka is opposed to it. The CMB is the just demand of all Tamils, who have expressed it in one strong voice. If the Centre does not constitute it soon, it will have to face the ire and dissatisfaction of the people,” Rajinikant said, striking a politically combative tone, for the first time and that too against the Centre. Joining the ongoing state-wide protests, demanding constitution of the Cauvery Management Board by the Centre, Rajinikanth, actors Kamal Hassan and Vijay, along with other actors and film personalities, participated in a silent protest in Chennai on Sunday.

Rajinikanth said that it was not a good idea to hold IPL matches in Chennai at a time when entire Tamil Nadu was agitating for Cauvery water. “It is an embarrassment to think of IPL in the present situation,” said the superstar, adding that if it was not possible to scrap Chennai from the IPL calendar, at least the Chennai Super Kings players should wear black badges and their officials must cooperate with that to reflect the feelings of the Tamil people.

And if even that becomes difficult to demonstrate, then the spectators, the youth and the students must wear black dresses to show Tamil Nadu’s Cauvery anguish, said Rajinikanth.

He was speaking to reporters outside his Poes Garden bungalow before leaving for the Cauvery protest by the Nadigar Sangam at Valluvar Kottam.

“Many are not clear who we are protesting for. We are not protesting for the sake of the rich farmers owning hundreds of acres. We are fighting for the poor farmers whose livelihood depends on their produce from the little piece of land they own. We must have these farmers as the face of this protest,” he said.

“We should show to the people the agony, living conditions and tears of these small farmers. The farmers in Karnataka will understand their pain even if the politicians there do not. And that will strengthen our protest here,” Rajinikanth said.

Asked about Kamal Haasan’s comments on his “spiritual politics”, Rajinikanth said, “I will not oppose Kamal Haasan. He is not my enemy. Poverty, corruption, unemployment, tears of the poor and the farmers are my enemies.”

On the Sterlite issue, Rajinikanth said any industry that threatens environment and health should not be allowed “even if it generates hundreds of crores of income for the government and creates thousands of jobs for the people”.

The apex court granted six weeks’ time to the Centre to formulate a scheme to ensure compliance of its 465-page judgment, which modified the Cauvery Water Dispute Tribunal award.

Following the verdict, Tamil Nadu has been urging the Centre to set up the CMB and CWRC to ensure it received its due share of water from the inter-state river. The six-week period ended on March 29. The delay in constitution of the CMB had also caused  disruptions in Parliament.