In all, by-elections were held in eight Assembly constituencies in five states, besides the Srinagar parliamentary seat. 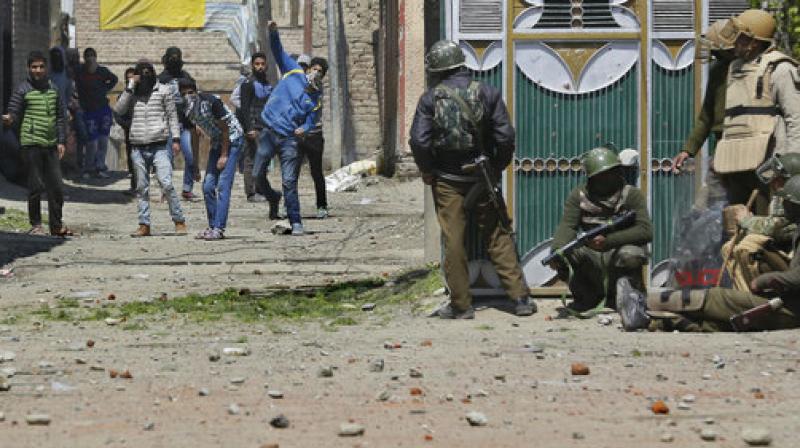 Voters in a long queue to cast their votes during Lok Sabha elections,at a polling booth in Srinagar on Sunday. (Photo: PTI)

New Delhi: Violence on Sunday marred the polling in Srinagar Lok Sabha constituency with at least seven people being killed in firing by security forces while incidents of firing were reported from two places in Ater Assembly seat in Madhya Pradesh.

However, bypolls in two Assembly constituencies each in Karnataka and Madhya Pradesh, one each in West Bengal, Assam, Rajasthan and Delhi passed off peacefully.

In all, by-elections were held in eight Assembly constituencies in five states, besides the Srinagar parliamentary seat.

Stone-pelting was reported from over two dozen places across the three districts of Srinagar, Budgam and Ganderbal which constitute the Srinagar constituency. The main contestants for the seat are Farooq Abdullah, the joint candidate of the National Conference and the Congress, and Nazir Ahmad Khan, the ruling PDP's nominee.

Army was called in to assist security forces control a rampaging mob which pelted stones and hurled petrol bombs to set a polling booth ablaze in Ganderbal.

More than 100 security force personnel were injured in the violence, officials said, adding that several civilians were also injured in police firing.

J-K Chief Electoral Officer Shantmanu said a poor 6.5 per cent polling took place in the parliamentary seat. "I cannot say anything about the repoll as of now. The figure can be anywhere around 50 or 100 polling stations or more than that," he told reporters.

While two persons each were killed Pakherpora in Chrar-e- Sharief, Beerwah and Chadoora areas of Budgam district and one person died in the district's Magam town, which is known as the gateway to Gulmarg.

Firing incidents were also reported from at two places in Madhya Pradesh after Congress and BJP workers clashed during the by-election in Ater Assembly seat.

The MP election commission, however, dismissed reports of booth capturing and said security was tightened after the incidents.

In Dholpur Assembly constitituency in Rajasthan, where BJP is in power, 74 percent polling was recorded till 5 PM.

BJP-ruled Assam's Dhemaji seat had a turnout of 66.97 percent while it was 65 percent in Bandhavgarh and 60 per cent in Ater in MP where BJP is in office.

Polling percentages in Gundlupet and Nanajanagud Assembly seats in Karnataka, where Congress is in power, was 78 per cent and 76 per cent respectively till 5 PM.

The turnout in Kanthi Dakshin Assembly seat in TMC-ruled West Bengal was 79.7 per cent till 5 PM while it was 44 percent in Delhi's Rajouri Garden Assembly seat till that time AAP holds office in Delhi.