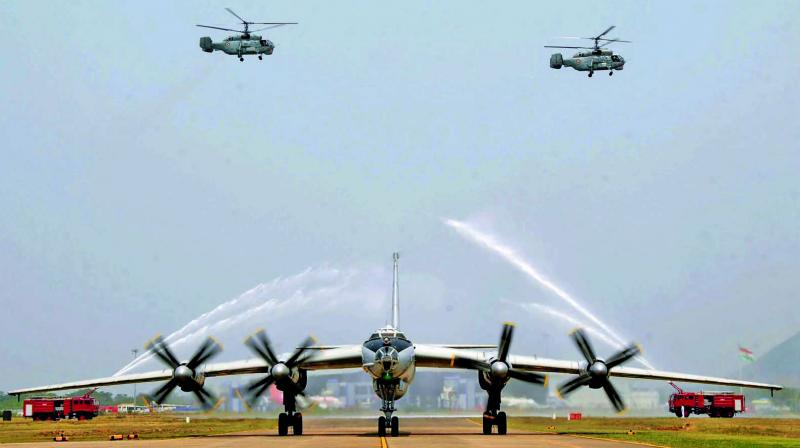 Visakhapatnam: One of the TU-142M long-range maritime patrol aircraft of the Indian Navy, which was recently de-inducted after 29 years of service, arrived here on Saturday, to be converted into a museum by the Andhra Pradesh government.

Mr Naidu said on the request made by the Andhra Pradesh government, the defence ministry allotted the aircraft to the state for converting it into a museum.

The aircraft would be dismantled and transported by road on trailers and re-assembled on the beach road.

“A Task Force with the officials of the state government and Indian Navy would be constituted to coordinate the activities to convert the aircraft into museum on the beach road near INS Kursura Submarine museum,” Mr Naidu said.

According to him, the aircraft would promote the knowledge to the citizens on the activities of the Indian Navy and its service to the nation.

The chief minister said that the TU142M has been the fastest turboprop aircraft in the world and has rendered yeomen service to the nation “with pride and elan” during 1988-2017.

He interacted with the crew members of the aircraft.

The aircraft was decommissioned by Chief of Naval Staff Admiral Sunil Lanba on March 29 at a ceremony at INS Rajali, India’s premier naval air station in Tamil Nadu’s Arakkonam.

A total of eight Tupolev-142Ms were inducted into the Navy. The Soviet-era aircraft was widely known as one of the most formidable reconnaissance platforms.