Sheikh Hasina said her government would take all necessary steps to ensure peace and security along the Indo-Bangla border. 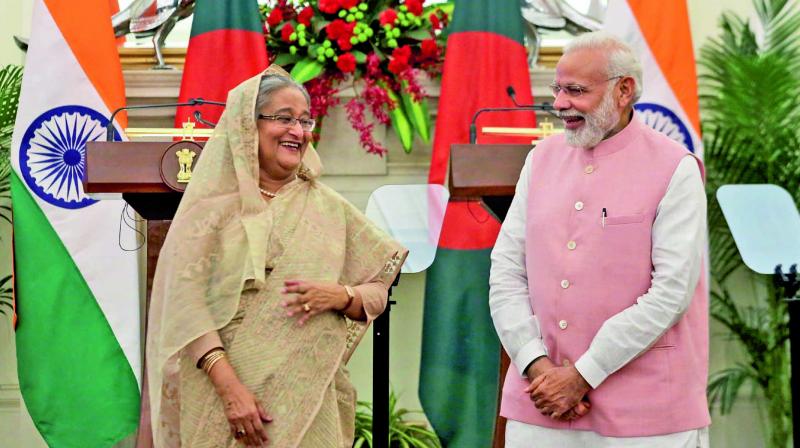 New Delhi: Prime Minister Narendra Modi announced on Saturday a staggering “new concessional line of credit of $4.5 billion for implementation of projects in priority sectors for Bangladesh” that brought Indian “resource allocation for the neighbouring country to more than $8 billion over the past six years”.

At an event at the Hyderabad House here, he also assured Bangladesh PM Sheikh Hasina of an early settlement to the Teesta river water-sharing issue and hailed his political foe and West Bengal chief minister Mamata Banerjee as his “honoured guest”.

What added tremendous impetus to ties is the “line of credit of $500 million to support Bangladesh’s defence-related procurement” from India apart from pacts on civilian nuclear energy that were among the 22 agreements the two sides inked.

Expressing “greatest admiration for PM Hasina’s firm resolve in dealing with terrorism” and “her government’s ‘zero-tolerance’ policy towards it” which he said “is an inspiration for all of us”, PM Modi also launched a thinly-veiled scathing attack on Pakistan without naming it. “There is a mentality in South Asia opposed to the approach of India and Bangladesh to promote development. This mentality nurtures and inspires terrorism. The mentality which influences those who plan policies under it and which regards terrorism as higher than humanism, destruction greater than development and annihilation better than creation,” he said, while PM Hasina honoured the Indian martyrs of the 1971 Bangladesh war of liberation highlighting the bond between the two nations.

In another clear message aimed at Pakistan, the two PMs also “condemned the genocide in Bangladesh in 1971”, with PM Modi saying, “We in India rejoice in our ties with Bangladesh. Ties that have been forged in blood and generations of kinship.”

Resolving to arrive at an agreement on the contentious Teesta river water issue, PM Modi said, “Teesta is important for India, for Bangladesh and for India-Bangladesh relationship. I am very happy that the chief minister of West Bengal is my honoured guest today . I know that her feelings for Bangladesh are as warm as my own. I assure you and the people of Bangladesh of our commitment and continuing efforts. We can and will find an early solution.” PM Modi’s praise of Ms. Banerjee is significant, given her reservations in the past few years on such a pact and its impact on West Bengal.

On her part, Sheikh Hasina said her government would take all necessary steps to ensure peace and security along the Indo-Bangla border.

In a joint statement, the two countries said, “The two Prime Ministers condemned the genocide that occurred in Bangladesh in 1971. They solemnly acknowledged the atrocities and called upon the international community to recognise and preserve the memory of those who lost their lives and those who suffered during the genocide. PM Modi thanked PM Hasina for her government’s gesture of recognising the sacrifices made by 1,661 Indian armed forces personnel who laid down their lives in the Bangladesh liberation war in 1971. PM Hasina personally handed over a citation and a crest to the next of kin of 7 Indian officers and soldiers who sacrificed their lives. PM Modi announced a special medical scheme under which 100 “Muktijoddhas” (warriors of the liberation war) of Bangladesh will be provided medical treatment in Indian hospitals every year. He also extended the Muktijoddha scholarship scheme for 10,000 heirs of Muktijhoddhas for another 5 years.”

On terrorism and in a veiled criticism of Pakistan, the joint statement said the two leaders “strongly condemned the recent barbaric terror attacks in India and Bangladesh and expressed their conviction that the fight against terrorism should not only seek to disrupt and eliminate terrorists, terror organisations and networks, but should also identify, hold accountable and take strong measures against States and entities which encourage, support and finance terrorism, provide sanctuary to terrorists and terror groups, and falsely extol their virtues.

PM Modi said energy security was an important dimension of the development partnership. “Today, we added an additional 60 MW of power to the 600 MW already flowing from India to Bangladesh. The supply of another 500 MW has already been committed from the existing inter-connection.”

He also said, “Connectivity is crucial ... Today, together with the Honourable chief minister of West Bengal , we have added several new links to our growing connectivity. Bus and train links between Kolkata and Khulna ... have been restored today. Inland waterways routes are being optimised. And, steps are being taken to put into operation the coastal shipping agreement.”

The civil nuclear pacts included cooperation in peaceful uses of nuclear energy, one between the atomic energy boards of the two countries and another for a nuclear energy partnership.