The tulip bulbs were imported from the Netherlands for undertaking field trials of three varieties of the plant. 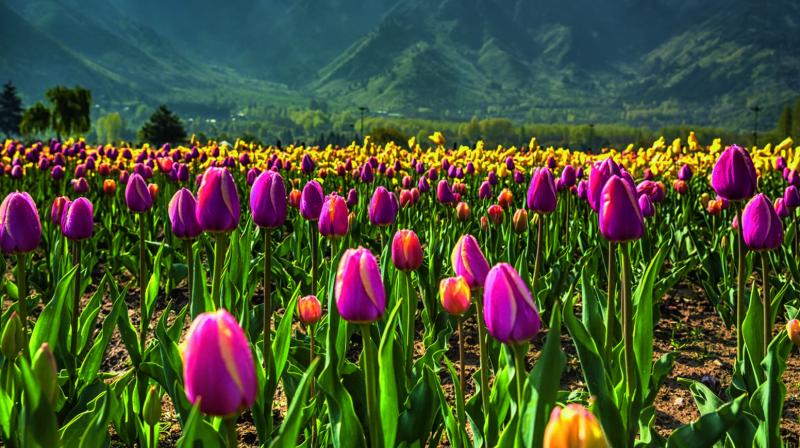 A file photo of a tulip plantation in Kashmir.

Koriya: The days are not far when blooming tulips in vibrant colours will dot the landscape in north Chhattisgarh, recreating Kashmir in spring.

Scientists at Indira Gandhi Agriculture University, Raipur, and Sher-e-Kashmir of Agriculture Science and Technology, Jammu, have made a breakthrough in identifying three varieties of tulip (from over 3,000), and an equal number of species of the lilium family as suitable for cultivation in the hilly regions of north Chhattisgarh.

“Field trial of cultivation of three varieties of tulips and an equal number of species of lilium has been successfully done in our Krishi Vigyan Kendra (agriculture research centre) in Koriya,” agriculture scientist in the centre Ranjit Rajput told this newspaper on Saturday.

“The findings will have a far-reaching implication in the farm sector in the tribal-dominated region, and promises to boost the local economy,” spokesman of Indira Gandhi Agriculture University K.K. Sahu said.

“Tulip cultivation will not only improve the financial condition of locals substantially, but also will promote tourism in the area, ensuring windfall gains for cultivators,” Mr Sahu said.

The Koriya KVK team comprising scientists Rajput and Kunti Bajara along with the scientist of Sher-e-Kashmir University of Agriculture Science and Technology, Naser Hamid Masood, conceived and executed the tulip project.

The tulip bulbs were imported from the Netherlands for undertaking field trials of three varieties of the plant. Some 1,600 bulbs, which were planted in mid-December 2016, bloomed in February last week this year.

“Significantly, the climatic condition of the region permits farming of tulips in open fields which will benefit farmers immensely. They are also easy to grow,” Mr Rajput said.

Nursing each bulb costs Rs 50-55, and each yields two-three flowers, which fetch around Rs 40-45 each in the market, generating a profit of Rs 90 for each bulb, the study showed.

The yield of tulip flowers and bulbs in one acre will be roughly between 2.5 lakh and five lakh.