MHA sources say that a sizeable section of the Jamaat cadres has overtly or covertly worked for militant organisations, especially the Hizb. 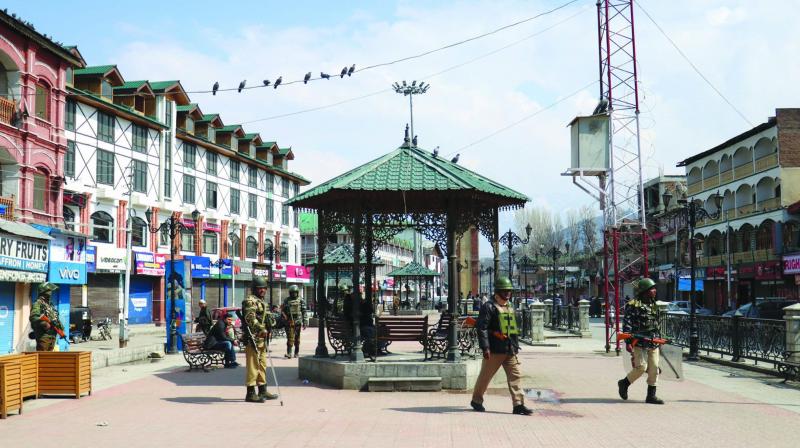 Srinagar: The Kashmir Valley shut twice past fortnight to protest over the Centre’s recent move of banning Jamaat-e-Islami (JeI) for a span of five years after declaring it an “unlawful association”.

In its February 28 order, the Union home ministry said the Jamaat has the potential of disrupting the unity and integrity of the country. It also said that if the party’s activities are not curbed immediately it is likely to “escalate its subversive activities, including an attempt to carve out an Islamic State out of the territory of Union of India”, continue advocating the secession of Jammu and Kashmir, and propagate “anti-national and separatist” sentiments.

It said that the move has been prompted also because of the fact that the Jamaat is the main organisation responsible for the propagation of separatist and radical ideology in the state particularly Kashmir Valley.

The home ministry sources have also maintained that a sizeable section of the Jamaat cadres has overtly or covertly worked for militant organisations, especially the Hizbul Mujahideen (HM).

Prior to proscribing of the Jamaat, more than 250 of its members including the entire leadership were taken into custody by the police from different parts of the Valley. The arrest spree has continued.

Jamaat-e-Islami Jammu and Kashmir is an independent organisation - separate from Jamaat-e-Islami Hind and Jamaat-e-Islami Pakistan. It supports the demand of plebiscite in J&K and is known for its pro-Pakistan leaning. In 1987, it was the main driving force behind the formation of Muslim United Front (MUF) which fought state Assembly elections against the National Conference-Congress combine.

It is said that the elections were rigged in favour of the ruling party leading to many of those associated with the MUF to turn to the gun. One of them was Muhammad Yusuf Shah who later became known as Syed Salahuddin, the “supreme commander” of the HM and chief of United Jihad Council, the alliance of pro-Pakistani militant outfits.

The Jamaat, formed in 1942, was banned during the Emergency and later also in 1991, the heyday of militancy in J&K. It, however, distanced from militancy in 1997 and subsequently split with separatist patriarch Syed Ali Shah Geelani and his likeminded cadres forming his own group called Tehrik-e-Hurriyat.

The Jamaat has taken part in electoral process in the state by fielding its candidates in the Assembly elections of 1971, 1977, 1983 and 1987. However, it has stayed away from the process after the separatist campaign burst into major violence in 1989-90.

Soon after the Centre’s declaring the Jamaat as an “unlawful organisation”, the authorities in J&K began to seal its offices and other properties. The seizure campaign started in northern district of Bandipore where the party office and a school run by its subsidiary Falah-e-Aam Trust (FAT) were sealed by the police in presence of a magistrate. Similar action was taken in other parts of the Valley and also in Jammu.

But the move to ban the Jamaat, particularly sealing of schools and orphanages run by it, was resented by various political parties, social organisations and religious, civil society and trade groups including all major mainstream parties except the BJP.

“New Delhi is pushing the people of Kashmir to the wall. It can evoke volatile combinations of emotions which in turn will leave negative effects on the ground situation,” warned Muhammad Yasin Khan, chairman of Kashmir Economic Alliance, a conglomerate of various trade organisations.

However, following criticism the state government said that schools, mosques and orphanages run by JeI have been kept outside the scope of seizures and sealing.

Its spokesman Rohit Kansal said, “Schools, mosques and orphanages have been kept outside the scope of seizures and sealing in the wake of the ban imposed by the government on JeI. Action is being taken against offices, assets, properties and other equipment of the banned organisation.”

Former chief minister and Peoples’ Democratic Party (PDP) president Mehbooba Mufti while questioning the wisdom behind banning the Jamaat asked, “Why is the government uncomfortable with Jamaat-e-Islami when radicalised Hindu groups representing fringe elements are given carte blanche to spread misinformation and vitiate the atmosphere in the country”.

She said that the Jamaat has worked “tirelessly” for the people of Kashmir especially on educational front and c)autioned the Centre of “dangerous ramifications” of banning it. “You cannot imprison an ideology or an idea”, she asserted.

Former chief minister and National Conference (NC) leader Omar Abdullah was equally perturbed by the Centre’s move. He said, “Our party and the Jamaat are poles apart ideologically. There is a stark difference in the disposition of both the parties. But, at the same time, I’m of the view that the move will inadvertently affect the peace building efforts”.

He added, “We may disagree with the ideology of the Jamaat but the move will unquestionably breed more radicalisation.”

Endorsing him, the NC general secretary Ali Muhammad Sagar saw in the Centre’s move “suppression” of an ideology. He said, “The Jamaat follows an ideology, a specific mind set which has to be tackled by arguments. By banning the Jamaat, the government will achieve nothing but give it a dissident glamour. The move will not help. It will rather impede the process of reconciliation and rapprochement in our state.”

But the BJP and other likeminded parties justified the ban on the Jamaat. “It was long overdue,” said BJP state president Ravinder Raina. He alleged that the HM is the brainchild of the Jamaat and is also largely responsible for the secessionist activities and violence in the state.