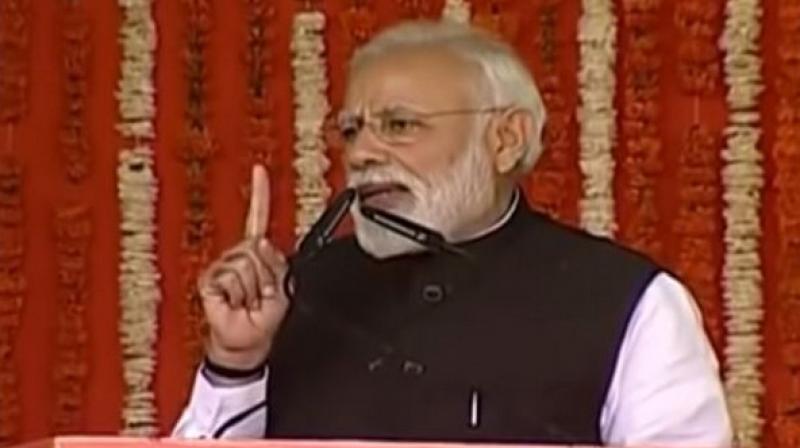 The Prime Minister mentioned the initiatives taken by the Union Government to clean the River Ganga. (Photo: ANI)

Kanpur: Prime Minister Narendra Modi on Friday in Kanpur inaugurated and laid the foundation stone for a slew of projects worth Rs.73.8 crore, including those for the Namami Gange project, aimed at cleaning and safeguarding the river Ganga.

The Prime Minister mentioned the initiatives taken by the Union Government to clean the River Ganga.

He said that it was earlier thought to be impossible to clean the River Ganga, but now his government is "making the impossible possible." Several actions were taken for the treatment of sewage water and stop drains from reaching the river, Modi said.

The newly inaugurated projects include the interception and diversion of the128 years old SisamauNala carrying 140 Million litres per day of untreated sewage into the Ganga.  Five other drains have also been intercepted and diverted.

The total cost of these projects amounts to Rs 63.80 crore. These projects will lead to Rs 23 crore litres of sewage/industrial effluent per day being prevented from flowing into the Ganga.

“These projects will prevent 140 million litres of untreated sewage and industrial effluent from flowing into the Ganga river every day,” Modi said.

Foundation stone for various projects was laid in the Jajmau region of Unnao district in Kanpur.

The work for 20 million litres per day (MLD) Common Effluent Treatment Plant (CETP) at Jajmau near Kanpur for tannery units was given a green signal.

The Jajmau project, estimated to cost Rs 617.02 crores, will prevent 2 crore litres of pollution load from the tannery pollutants from entering the Ganga.