India   All India  09 Mar 2019  Congress red-faced as ministers quit ahead of key meet
India, All India

Congress red-faced as ministers quit ahead of key meet

Chawda has joined the saffron party immediately after resignation, while Mr Sabaria is expected to join very soon. 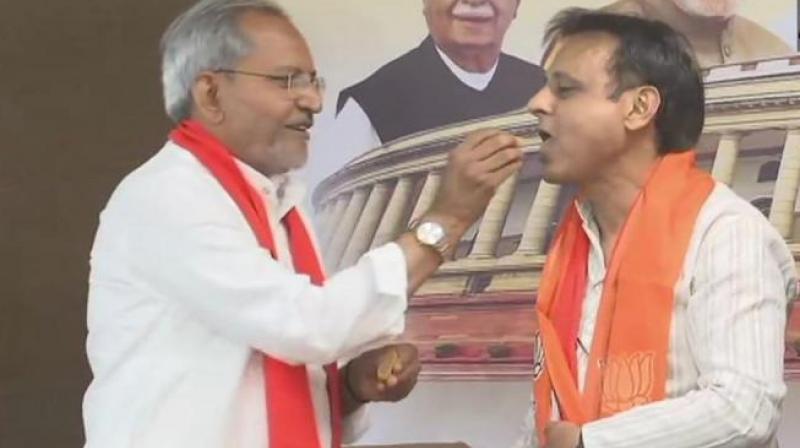 Ahmedabad: Ahead of the Congress Working Committee (CWC) meet, which is to be held in Ahmedabad on March 12, the state unit of the party is facing a huge embarrassment as its MLAs are resigning one by one and joining the BJP. The latest to do so are Jawahar Chavda and Purushottam Sabaria from the Manavadar and Halwad constituencies respectively. Both MLAs have put their papers to the speaker of the Assembly. Mr Chawda has joined the saffron party immediately after resignation, while Mr Sabaria is expected to join very soon. With these resignations, Congress’ tally in the Assembly has been reduced to 72 from 78.

Earlier Dr Asha Patel, who was elected from Unjha seat of North Gujarat, also joined the BJP while state Cabinet minister Kunvarji Bawalia had resigned from Jasdan constituency eight months ago and was re-elected as a BJP candidate in January this year.

In another case, Bhagwan Barad, a Congress MLA, was suspended by speaker of the Gujarat Assembly immediately after a local court convicted him in a land mining case.

Mr Chavda, a four-term MLA, is the son of towering Congress leader Pethalji Chavda. He is believed to have a strong hold over the Ahir community, which dominates the constituency.

He is now likely to contest from the Junagadh Lok Sabha seat. “I have decided to join BJP after long thought. Though I didn’t have any issue with the Congress leadership, I think we should stand united with Prime Minister Narendra Modi so I am here,” he said while joining the saffron party. BJP leaders believe that his joining will increase the party’s chance of winning Junagadh.

The party is trying hard to pull strong congress leaders who enjoyfull community support. Apart from cast arithmetic, it is also huntingfor leaders from the opposition where it fears to lose.

Speculations are also on rife of joining few more congress MLAS,including young OBC leader Alpesh Thakor, to BJP. Rumors of hisswitching over have been doing around for some time. All eyes are nowon his next move.

This series of resignations is giving state congress unit a big joltat a time when the party is concentrating fully on big public rally tobe held after CWC meet on 12th. The party has also declared fourcandidates of Gujarat for Lok Sabha including former state partypresident and Union Minister Bharat Solanki. ‘This is a conspiracy byBJP against congress.  Voters will give answers to them in election’leader of opposition Paresh Dhanani reacted after this development.

However, convener of Patidar Anamat Andolan Samiti-PASS Hardik Patel’sannouncement of joining congress has given some relief to the party.Hardik will join in presence of congress president Mr Rahul Gandhi on12th. He has also announced to contest Lok Sabha from Jamnagar seat.