India   All India  09 Mar 2018  Neiphiu Rio sworn in as Nagaland CM, BJP gets lion’s share in govt
India, All India

Neiphiu Rio sworn in as Nagaland CM, BJP gets lion’s share in govt

BJP leader Y. Patton, who is elected as the leader of BJP Legislature Party, was sworn in as the deputy chief minister. 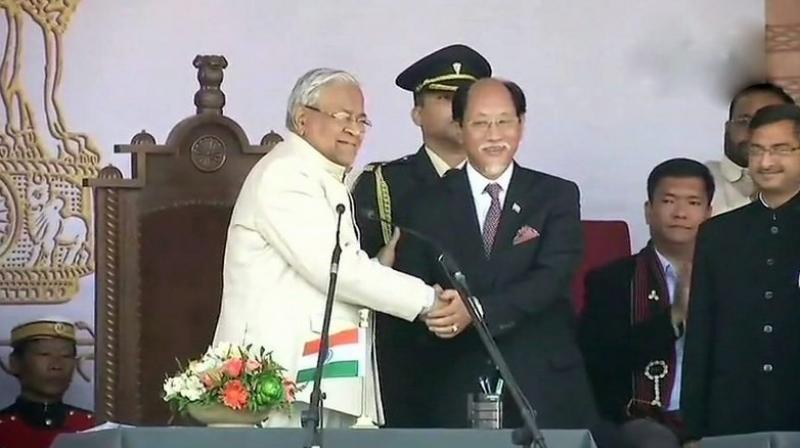 Nagaland Governor P.B. Acharya administered the oath of office and secrecy to Neiphiu Rio and his 11 Council of Ministers. (Photo: ANI/Twitter)

Guwahati: After an exile of nearly four years from state politics, Nationalist Democratic Progressive Party leader Neiphiu Rio made a strong comeback on Thursday when he was sworn in as the chief minister of Nagaland for the fourth time on Thursday.

Nagaland governor P.B. Acharya administered the oath of office and secrecy to Mr Rio, who is heading the NDPP-BJP led People’s Democratic Alliance government in the state. BJP leader Y. Patton, who is elected as the leader of BJP Legislature Party, was sworn in as the deputy chief minister.

Though the BJP has been the part of Nagaland government since 2003 when it won seven seats and joined the government as part of Naga People’s Front-led Democratic Alliance of Nagaland, this was for the first time that the saffron party has got the lion’s share in the government by grabbing six cabinet berths out of 12.

Despite being in the driver’s seat the NDPP, have three Cabinet ministers and the post of chief minister. One JD-U and one Independent MLA occupied the other two berths.

In 2013 elections, the BJP had got just one seat. The outgoing Cabinet though had two BJP ministers, including a NCP MLA who joined the BJP after Lok Sabha elections in 2014.

It is significant that Mr Rio, who is also the MP, was elected unopposed on an NDPP ticket from 11th Northern Angami-II Assembly constituency. 67-year-old Mr Rio was educated at Baptist English School, Kohima and Sainik School in Purulia, West Bengal. He did his higher education from St Joseph College, Darjeeling and graduated from Kohima Arts College.

Mr Rio, who led Nagaland for 11 years, began his tryst with politics when he was elected president of Kohima district youth wing in 1974.