India   All India  09 Mar 2017  Officers forced to eat their words on farmer’s death
India, All India

Officers forced to eat their words on farmer’s death

A copy of the report was given to the public so that there is no scope of changing it later. 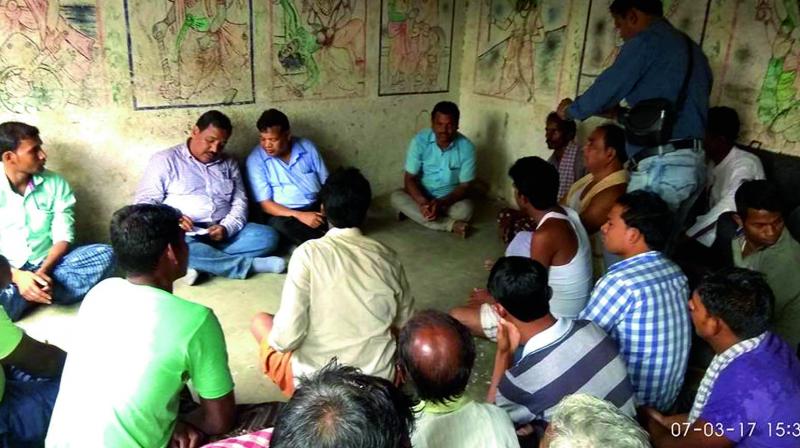 Two agriculture officials were forcibly made to write a report on the suicide of a farmer in Odisha’s Bargarh. (Photo: Asian Age)

Bhubaneswar: Farmer suicides are back to haunt the Naveen Patnaik government and this time it’s the common man that took the matter into its hands and forced the government to stand up and take notice.

Reports on Wednesday said that some officers in Odisha’s Bargarh district, who without visiting the spot had earlier reported a debt-ridden farmer’s death as the fallout of a family feud, were on Tuesday forcibly taken to the peasant’s parched croplands and dilapidated house and asked to write a new report.

They categorically asked the officers to truthfully report what had driven farmer Khainu Bagarti alias Hadu to commit suicide, without using their imagination.

Despite their reluctance, the officers, led by deputy director of agriculture Nabakishore Dash, were made to write their report before the public. A copy of the report was given to the public so that there is no scope of changing it later.

The officers had earlier reported to the Bargarh district collector Anjan Kumar Manik that Khainu Bagarti had committed suicide after picking up a quarrel with his wife Kalabati.

Without any cross-verification, the collector forwarded the same report to state agriculture minister Pradeep Maharathy who read it out in the state Assembly drawing flak from the Opposition.

Khainu’s wife Kalabati strongly reacted to the minister’s reply saying the minister’s “misinformation” had hurt her more than the loss of her husband.

The Opposition BJD and Congress immediately seized upon the issue to attack the agriculture minister forcing him for issuing a fresh probe order. “A government does not always necessarily mean a council of ministers headed by the Prime Minister at the Centre or chief minister at the state level. Nor are the bureaucrats well supported by subordinates,” said BJP leader Suresh Pujari.

Stating that the government’s twisted methodology in farmer suicide cases stood exposed in the Khainu Bagarti’s case, Mr Pujari said in the previous 174 farmer death cases, the Naveen Patnaik government might have adopted a similar practice.

“The BJD government must admit that farmers are committing suicide due to crop loss and at certain pockets due to distress sale of vegetables. Otherwise, the voters who voted against the Naveen Patnaik government in recently held panchayat polls will write its obituary in 2019 Assembly polls,” said Mr Pujari.