Repos launches mobile pumps
India   All India  09 Mar 2017  Had no contact with Saifullah for a month: Lucknow ISIS terrorist's father
India, All India

Had no contact with Saifullah for a month: Lucknow ISIS terrorist's father 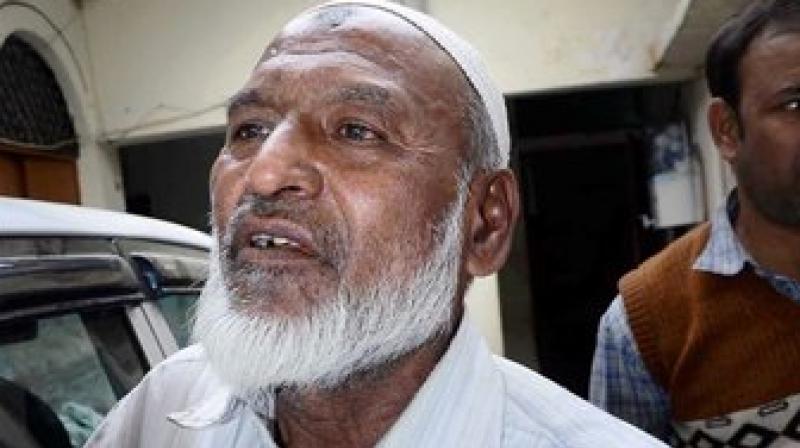 Lucknow: A 12-hour anti-terror operation in a busy Lucknow locality ended early Wednesday when commandos shot dead a suspected terrorist allegedly involved in a train explosion in Madhya Pradesh a day before.

The UP police said he was a “self-radicalised sympathiser” of terror outfit ISIS, while the state’s anti-terror squad (ATS), involved in the operation, called him an “active member” of an ISIS module.

Television footage showed policemen carrying a body wrapped in a white sheet from a house in the city’s thickly populated Thakurganj area where Saifullah, 23, was holed up.

Several Indians, mostly from Kerala, have joined ISIS, but he is the first homegrown terror suspect being linked to the outfit that has overran large parts of Syria and Iraq in its quest to establish a caliphate under strict Islamic laws. 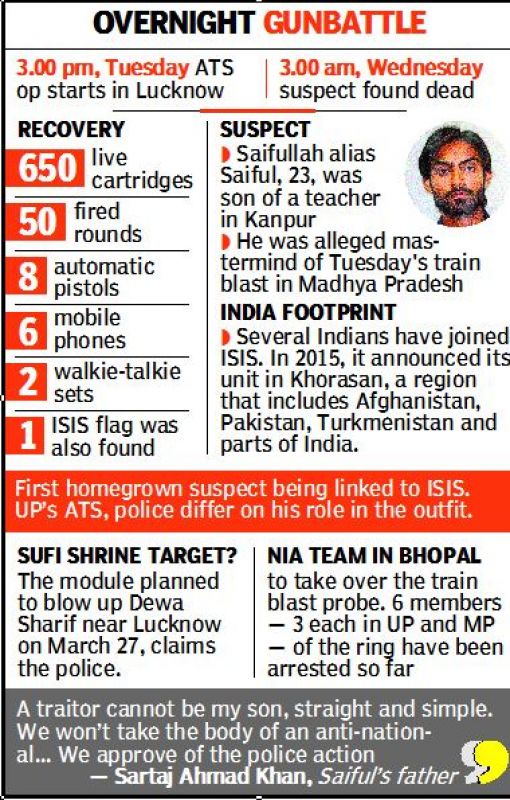 The operation got over at around 3 am, hours before people began voting in UP’s last phase of Assembly elections. A large quantity of arms and ammunition, some mobile phones and maps, besides an ISIS flag were recovered from the rented house.

Six people — three each from UP and MP — have been arrested in connection with the train blast in which 12 people were injured.

Senior UP police official Daljit Singh Chaudhary said there was no evidence that the suspects had any direct connection with ISIS, but had become radicalised online.

“There is no evidence of any outside funding or any external support. They were self reliant,” he said.

The module planned to blow up a famous Sufi shrine, Dewa Sharif, in UP’s Barabanki on March 27, top sources said. Security at the shrine and in the town has been stepped up.

However, top ATS official Aseem Arun said the slain suspect was an active member of ISIS’ module in Khorasan, a region that includes Afghanistan, Pakistan, Turkmenistan and parts of northwestern and western India. He said Saifullah was given ample opportunities to surrender. “We initially tried smoking him out with chili bombs. We began firing only when he shot at us when we tried to enter,” he said.

Saifullah’s father Sartaj Ahmad Khan and brother Khalid told reporters in Kanpur that they were not in touch with him for the past two and a half months.

“He was not doing any work and was in a bad company. I beat him up and asked him to leave our house. We had no communication with him for a month, but he called up about a week ago and said he was going to Saudi Arabia for work”, the father said.

“We are not taking the body of an anti-national and we approve of police action”, he said.