A member of right-wing Hindu group Abhinav Bharat, Assemanand has been in jail since December 2010. 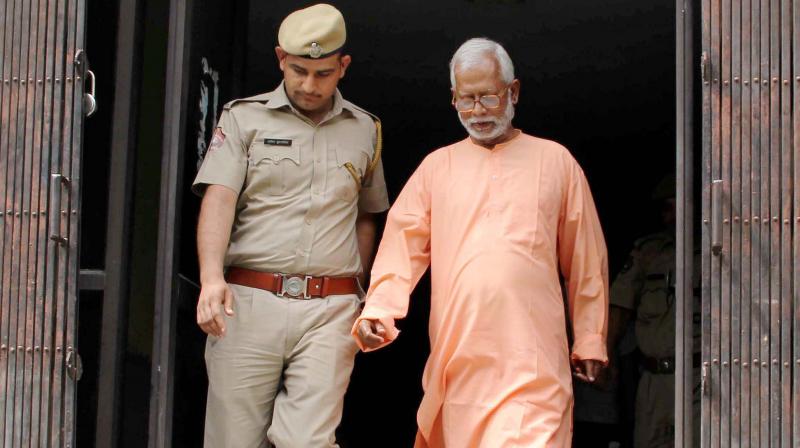 New Delhi/Jaipur: A special NIA court in Jaipur on Wednesday acquitted right-wing activist Swami Aseemanand and six others in the 2007 Ajmer blast case. The court, however, found three persons — Sunil Joshi (dead), Devendra Gupta and Bhavesh Patel — guilty, and were convicted the case.

Judge Dinesh Gupta let off Swami Aseemanand and six others, giving them the “benefit of the doubt”. Devendra Gupta, Bhavesh Patel and Sunil Joshi were convicted under various sections of the Indian Penal Code, the Explosive Substances Act and the Unlawful Activities (Prevention) Act for the bomb attack, that had left three pilgrims dead and 15 others injured. Joshi was murdered in December 2007.

The quantum of sentence will be announced on March 16, defence counsel Jagdish Rana told reporters in Jaipur. Swami Aseemanand was an accused in the 2007 Samjhauta Express blast case. A total of 68 people were killed in the blasts in two Samjhauta Express coaches near Dewana railway station in Panipat on February 18, 2007.

Among those acquitted were Harshad Solanki, Lokesh Sharma, Mehul Kumar, Mukesh Vasani, Bharat Bhai and Chandrashekar, he said, adding that Chandrashekhar was out on bail while the others were in judicial custody. “The conviction was made under Section 120b (criminal conspiracy), 295A (deliberate and malicious acts intended to outrage religious feelings of any class by insulting its religion or religious beliefs) of the IPC, as well as the Explosive Substances Act and UAPA, Mr Rana said.

A member of right-wing Hindu group Abhinav Bharat, Assemanand has been in jail since December 2010. He was also named an accused in Hyderabad Mecca Masjid blast case. On December 26, 2010, he was arrested by the CBI from Hardwar for his alleged role in the Mecca Masjid blast, in which 14 persons were killed. According to the National Investigation Agency, which was probing the Ajmer blast, three of the accused — Sandeep Dange, Ramchandra and Suresh Nair — are absconding. The case was handed over to the Rajasthan ATS and later transferred to the NIA, which re-registered the case with the NIA police station in New Delhi on April 6, 2011.

There were as many as 149 witnesses in the case and 451 documents were examined. The NIA had filed three supplementary chargesheet in the case. The blast on October 11, 2007 in the dargah of Khawaja Moinuddin Chisti at Ajmer at the time of roza iftar had left three pilgrims and 15 others injured.