Polling was largely incident-free except for clashes between SP and BJP supporters in Chandauli district. 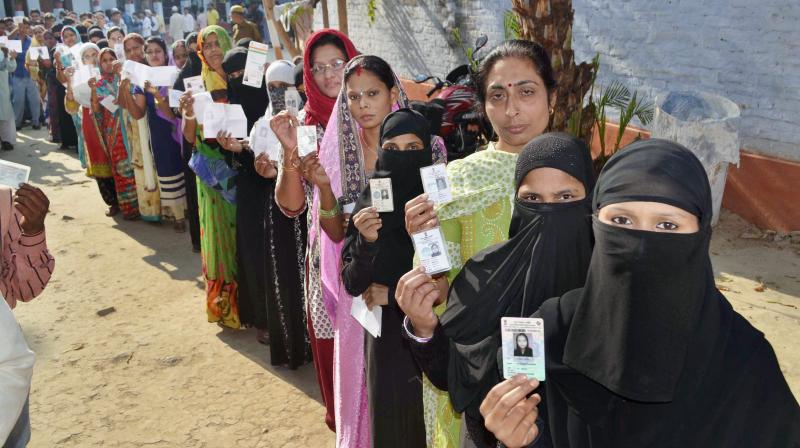 Women line up at a polling booth in Varanasi during the seventh and final phase of the Uttar Pradesh polls. (Photo: PTI)

Lucknow: The Uttar Pradesh Assembly elections came to an end on Wednesday with polling in the seventh phase which was recorded at 60.03 per cent. The turnout on these seats in 2012 was 57.92 per cent in 2012 Assembly polls.

The highest voter turnout was recorded in Chandauli (64 per cent) and the lowest in Bhadohi (57.9 per cent). Varanasi recorded a turnout of 60.95 per cent.

Polling was largely incident-free except for clashes between SP and BJP supporters in Chandauli district. In Mirzapur, some villagers boycotted polling in protest against lack of development in their area.

Polling on Wednesday was held on 40 Assembly seats spread across seven districts that include Varanasi, Ghazipur, Jaunpur, Chandauli, Mirzapur, Bhadohi and Sonebhadra in the Purvanchal and Vindhyachal regions of the state. Polling in this phase included the three Naxal-affected districts namely Mirzapur, Chandauli and Sonebhadra where tight security had been ensured.

In 2012, in this phase, out of the 40 Assembly seats, the Samajwadi Party had won 23, the BSP had got five and the BJP had won only four seats. The Congress had won three seats and others had got five seats. Meanwhile, the campaign in the last phase of polls was a high-powered one with Prime Minister Narendra Modi, along with 17 Union ministers, camping in Varanasi, which is also Mr Modi’s parliamentary constituency.

The BJP is banking on its allies, the Apna Dal (Anupriya) and Suheldev Bhartiya Samaj Party (SBSP), since both of them have their areas of influence in this phase.

The Samajwadi Party is facing the challenge of maintaining, if not improving, its 2012 tally of 23 seats. The BSP president Mayawati is also confident of increasing her tally in this phase.