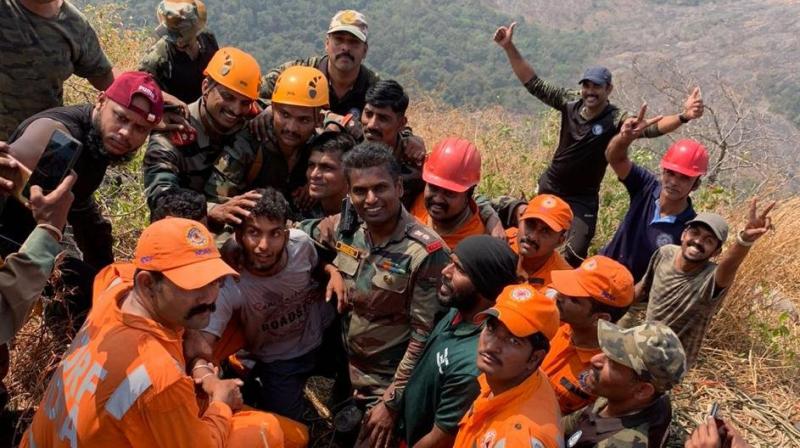 Indian Army Southern Command has rescued the stranded trekker to safety from the dangerous cliff, across the treacherous rocky mountain face. (Twitter/@IaSouthern)

Kochi: A 23-year youth who was trapped in a cleft of Malampuzha mountains in Kerala for nearly two days has been rescued by the Indian Army. The Army team in an unprecedented rescue mission brought Babu, the youngster, to the top of the mountain. The rescue mission lasted for more than 40 minutes. The youngster has been airlifted to the district hospital for health checkup.

Babu, who went for trekking with his friends on Monday at the 1000-metre high Cheradu hills slipped and fell into a dangerous crevice along the steep rock. As Babu was trapped in a recess on the mountain face, between rocks, he could not move and screamed for help. He had to spend nearly 45 hours in the scorching heat with no water or food.

Though Police, Fire and Rescue Services teams tried to rescue him, all their efforts went in vain. The attempts to give him food and water using a drone also didn’t succeed. The Navy team members tried to airlift him using rope, but their efforts also failed.

As requested by the state government, the Army team reached the spot and began the rescue operation by Tuesday night. Finally, the  mountaineering experts of the Army team from Bengaluru could reach Babu and provided him food and water.

Later, the army personnel brought him to the top of the mountain by strapping him to one of the rescuers using safety belt and rope. The health condition of the youth is stable.  The TV channel visuals showed the rescue team slowly climbing up by making stops in between to give the youth some rest.

The youth was hauled up to safety by 10.08 AM by the Army personnel and successfully completed the massive rescue effort, perhaps the first of its kind in the state.

Besides the Army, teams of NDRF, Coast Guard, Air Force, Police and other agencies helped in the rescue mission.