Lanka PM Rajapaksa omits any mention of this in his statement. 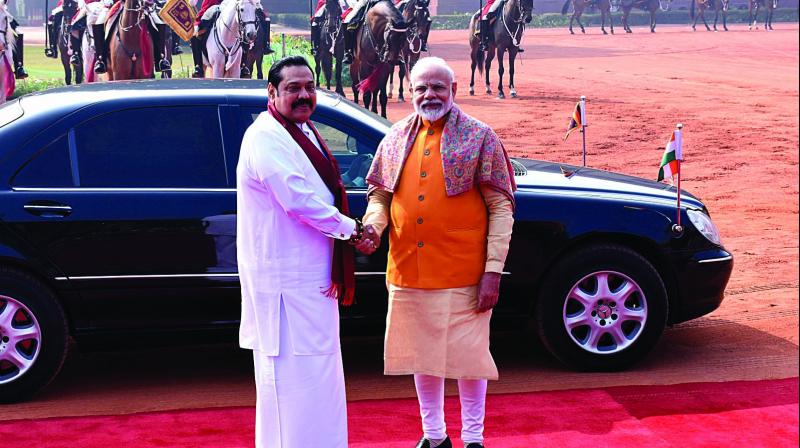 New Delhi: During frank discussions with visiting Sri Lankan Prime Minister Mahinda Rajapaksa at the Hyderabad House in Delhi on Saturday “on issues related to reconciliation”, Prime Minister Narendra Modi conveyed that New Delhi expected Colombo to “realise the expectations of the Tamil people for equality, justice, peace, and respect within a united Sri Lanka”.

Curiously, the Sri Lankan PM omitted any mention of this in his statement before the media in New Delhi. But PM Modi, in his statement to the media after “open” discussions on the matter, pitched for the “reconciliation process” in the island nation — between the majority Sinhalas and the minority Tamils — and the implementation of the 13th amendment in Sri Lanka that stands for devolution of power to the provinces.

But any reference to this too was omitted by the Sri Lankan PM who was the President in 2009 when the Sri Lankan Army won a bitterly-fought war against the rebel Liberation Tigers of Tamil Eelam (LTTE).

While the Sri Lankan PM continues to be seen as a hardliner by the island nation’s Tamils, Indian government sources claimed that nothing much should be read into the omission as the Sri Lankan government had categorically asserted earlier that it stands for all Sri Lankans, irrespective of ethnicity.

Mr Rajapaksa is on a four-day visit to India from February 7 to 11 during which he will also visit Varanasi, Sarnath, Bodh Gaya and the temple town of Tirupati.

On the issue of Indian fishermen caught fishing while straying into Sri Lankan waters, PM Modi said both he and the Sri Lankan PM agreed “to continue a constructive and humanitarian approach on this issue” as it directly affects livelihoods.

While India has built thousands of houses in the northern and eastern provinces of Sri Lanka that have a huge Tamil population, Mr Rajapaksa interestingly also pitched for these housing facilities in other parts of Sri Lanka. Both nations also discussed economic cooperation as well as ways to strengthen anti-terrorism cooperation.

But it was the reference to the reconciliation issue by PM Modi that was significant. Mr Rajapaksa, during his tenure as Sri Pankan President from 2005-15, was seen as a hardliner. The final months of the Lankan Army’s military campaign to crush the LTTE in 2009 earned both widespread praise and bitter criticism for Mr Rajapaksa who became Prime Minister late last year after his brother Gotabaya Rajapaksa won the presidential polls. Both the Rajapaksa brothers were also earlier seen as pro-China but now want to appear to be even-handed without antagonising either India or China.

In his statement after talks with Mr Rajapaksa, PM Modi said, “We spoke openly on issues related to reconciliation. I am confident that the government of Sri Lanka will realise the expectations of the Tamil people for equality, justice, peace and respect within a united Sri Lanka. For this, it will be necessary to carry forward the process of reconciliation with the implementation of the 13th Amendment to the Constitution of Sri Lanka.”

Appreciating the Lines of Credit (LoCs) announced by India last year for the island nation, the Sri Lankan PM requested PM Modi “to consider further assistance to expand the housing projects to all parts of the island to provide benefits to many Sri Lankans living in rural parts of the country”.

PM Modi later said, “Today Prime Minister Rajapaksa and I discussed in detail all aspects of our bilateral relations and international issues of mutual interest. Terrorism is a major danger in our region… both countries have fought this problem firmly. There were painful and barbaric terrorist attacks on Easter Day in Sri Lanka in April last year. These attacks were not only a blow to Sri Lanka, but also to humanity. And so, in our conversation today, we discussed furthering our cooperation against terrorism. I am happy that Sri Lankan police officers have started participating in anti-terrorism courses in India’s premier training institutes.”

On other issues, PM Modi said, “India has been a trusted partner in Sri Lanka’s development efforts. The new Lines of Credit announced last year will give more strength to our development cooperation. We are happy that the Indian Housing Project for the construction of more than 48,000 houses for internally displaced people in the northern and eastern region of Sri Lanka has been completed. Apart from this, the construction of several thousand houses for Tamil people of Indian origin is also progressing in the up-country region. Prime Minister Rajapaksa and I also discussed the humanitarian issue of fishermen. This theme directly affects the livelihood of people of both countries. And, therefore, we agree to continue constructive and humanitarian approach on this issue.”

“The recent direct flight between Chennai and Jaffna is part of our efforts in this direction. This direct flight will increase connectivity options for the Tamil population of the northern region of Sri Lanka. And it will also be beneficial for the economic and social development of the region. The good response received to this flight is a matter of happiness for both of us,” PM Modi said.