JCB driver dies, buried under the rubble of commercial building 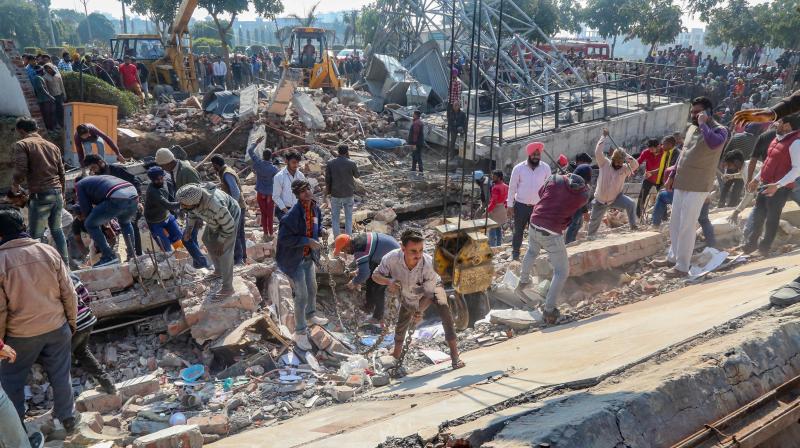 Rescue operations being carried out after a three-storey building collapsed in Mohali district, Saturday, Feb. 8, 2020. The building, located on the Kharar-Landran road, came down when a JCB machine was digging nearby. (PTI Photo)

Chandigarh: A three-storey commercial building collapsed while digging work was going on at an adjoining site in Punjab's Mohali district on Saturday, leaving one person dead, officials said.

Taking a serious note of the incident, chief minister Amarinder Singh asked the Mohali additional district magistrate to conduct a thorough probe into the matter and submit his report within a week.

The officials said three persons have been rescued and efforts are on to find out if more people are trapped under the debris.

Mohali deputy commissioner Girish Dayalan said the JCB machine driver, identified as Harvinder Singh, has died in the incident. His body was retrieved from the debris late on Saturday evening.

The officials said the heavy earth moving machine might have hit the foundation of the building, but added that the exact cause of the incident would be known after the inquiry.

They further said sniffer dogs were still looking for any person trapped under the debris.

Two persons were rescued earlier and one, who sustained a fracture in his arm, was taken out of the debris in the evening, Jain said.

The administration made all arrangements for undertaking rescue operation at night to ensure nobody remains trapped under the debris.

The chief minister also directed the district administration to take all possible steps to rescue those trapped under the debris.

As per the chief minister's order, the entire cost of the treatment of those injured in the incident would be borne by the Punjab government, a state government spokesperson said.

Mohali deputy commissioner (DC) Dayalan said the SDM of Kharar has been ordered to inquire into the incident and submit a report within three days.

"How did this happen and did they (builder) have requisite permission to do this will be known only after the inquiry," said Dayalan.

The probe would also ascertain if the construction was illegal or not, the statement said.

A mobile tower was also stated to have fallen down where the building collapsed, the officials said.

The army was put on standby to assist in the rescue operation incase the need arises, the DC said.

Requisite machinery and equipment were pressed into service in the rescue operation, the SDM said.

Chief minister Amarinder Singh earlier expressed anguish over the incident and said he has sought a detailed report from the Mohali deputy commissioner.

"Anguished to learn of the collapse of a three-storeyed building in Kharar today with 2 people trapped. @NDRF , Fire Brigade & Mohali Admin are on the spot for immediate rescue and relief. Have asked DC Mohali @GirishDayalan to send a detailed report on what caused this collapse," Singh tweeted.