Casualties because of avalanches, falling stones; 5 cops among dead. 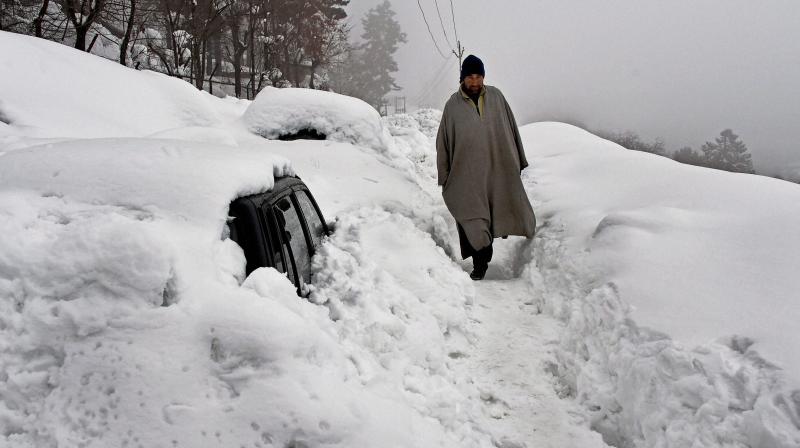 One policeman who is still missing is presumed dead. (Photo: AP)

SRINAGAR: About a dozen people including five cops have been killed as heavy snowfall wreaked havoc across Kashmir Valley and parts of Jammu region of Jammu and Kashmir.

The casualties took place in a series of avalanches and shooting of stones along the treacherous Srinagar-Jammu highway and elsewhere in the State. Also, extensive damage has been caused to both public and private properties mainly in the Kashmir Valley.

The official sources said that the rescuers on Friday retrieved the bodies of seven persons from under the snow near Jawahar Tunnel along the Srinagar-Jammu highway. The victims were among 10 persons — six policemen, two firemen and two civilian detainees — who were trapped in heaps of snow after a police post was swept by an avalanche on Thursday night.

According to the officials, the members of State Disaster Response Force (SDRF), the J&K Police and Fire and Emergency Department launched a rescue and relief operation immediately after the incident. Though strong winds and continuing heavy snowfall hampered the operation, the rescuers were able to pull out two policemen alive while seven others had already died. One policeman who is still missing  is presumed dead.

In a separate incident, a couple died after they were swept by an avalanche in the Valley’s Anantnag district on Thursday. The rescuers, however, succeeded in pulling out their two children alive. The police said that the avalanche hit the house of one Bashir Ahmed Qureshi in Sonabrari Magam village in Kokernag area of the district on Thursday evening.

After the Valley and parts of Jammu region received heavy snowfall for two days and with six to ten feet of snow having been accumulated at places particularly in southern parts of the Valley, the authorities had issued an avalanche warning for 16 of the 22
districts in the State for next few days.