The visit comes amid protests in the region against the Citizenship (Amendment) Bill. 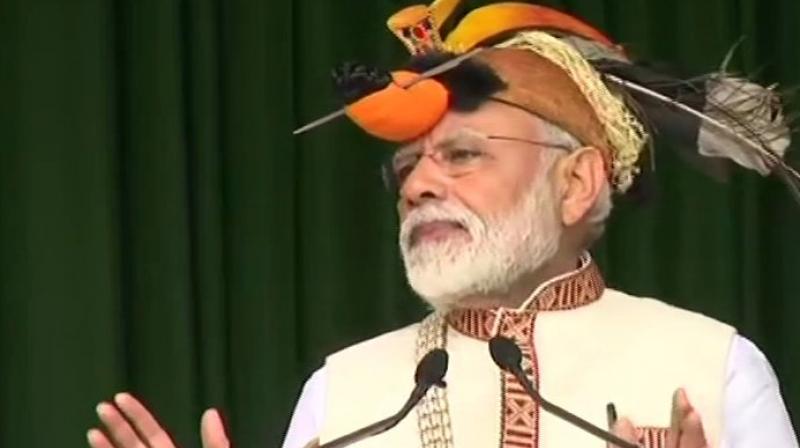 PM Modi is on a two-day visit to Assam, Arunachal Pradesh and Tripura which began on Friday. (Photo: ANI | Twitter)

Guwahati: Prime Minister Narendra Modi on Saturday inaugurated and laid foundation stones of several projescts worth over Rs 4,000 crore in Arunachal Pradesh.  PM Modi is on a two-day visit to Assam, Arunachal Pradesh and Tripura which began on Friday. The visit comes amid protests in the region against the Citizenship (Amendment) Bill.

“I am happy to inaugurate and lay foundation stones for projects worth over Rs 4,000 crores. Besides this, work on projects worth Rs 13,000 crores is taking place at a fast pace in Arunachal Pradesh,” the PM said at a meeting at Indira Gandhi park near state capital Itanagar.

PM Modi said the projects launched on Saturday would not just improve connectivity in the state but also strengthen the power sector, would boost health sector and help in promoting state’s culture.

Modi laid foundation stone for the Greenfield airport at Hollongi near Itanagar and inaugurated the retrofitted Teju airport in Lohit district.

He laid foundation stone for a film and television institute at Jote, seven electric sub stations and the Sella Tunnel and its approach road in Tawang.

PM Modi said, “Arunachal Pradesh is a strategically important state related to national security. But still not much focus was given by earlier government to improve facilities in this state. Our government made continuous efforts to change this.”

The PM is slated to address a rally at Changsari near Guwahati and another at Agartala in Tripura later in the day before departing to New Delhi.