Of the 189 passengers, only two were children, an airport official said. None of the passengers was inj-ured in the incident. 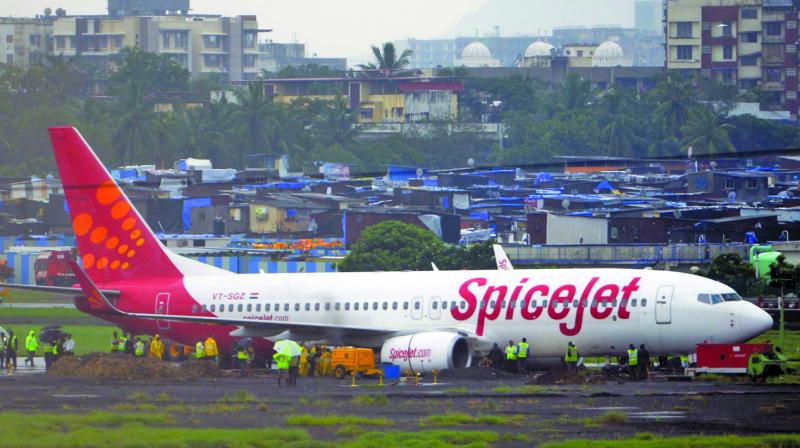 However, the pilot handled the situation smartly to bring the aircraft to a halt safely. The passengers were disembarked through the emergency exits. (Photo: Rajesh Jadhav)

Chennai: As many as 193 persons onboard a New Delhi bound Spicejet domestic flight from Chennai had a close shave after a tyre of the aircraft burst while it made an emergency landing at the Chennai airport on Thursday. Flight operations were affected in the airport for more than an hour as the flight landed on the main runway.

The budget carrier had left the airport late by about 40 minutes. Airport officials said the flight took off around 1.40 pm with 189 passengers and four cabin crew. While in midair, the pilot spotted a technical snag and initially requested an emergency landing at Vizag airport. Since it was not a feasible option, the pilot was advised by the Air Traffic Control to return to Chennai airport for the landing.

Meanwhile, preparations were underway at the Chennai airport for the emergency landing. Around 2.30 pm, the flight landed on Runway 1 of the airport when the front tyre burst. Sparks emanated in the impact and the flight experienced a judder.

However, the pilot handled the situation smartly to bring the aircraft to a halt safely. The passengers were disembarked through the emergency exits.

Of the 189 passengers, only two were children, an airport official said. None of the passengers was injured in the incident. The passengers were immediately attended to by a team of medical professionals at a waiting hall.

Airport sources said that flight operations of as many as 18 flights were affected. An investigation has been initiated.