Ramesh claimed that insufficient funds were allocated for health insurance scheme which will benefit private hospitals rather than public. 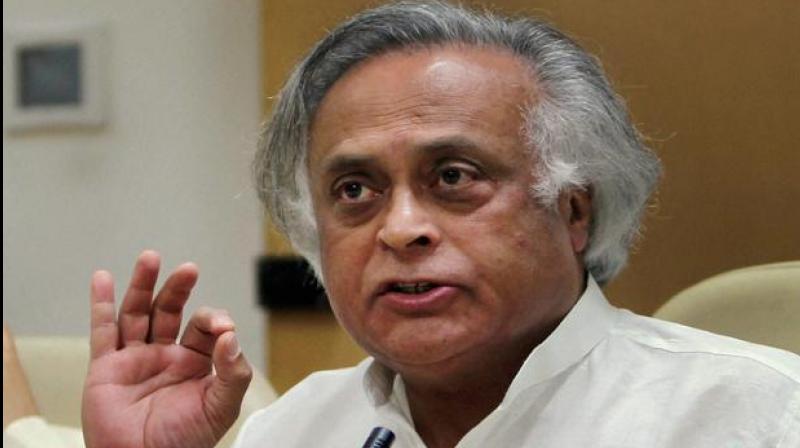 Congress MP Jairam Ramesh said that the health insurance scheme existed during the UPA tenure and only the money had been increased. It was a work in continuation, he claimed. (Photo: File | PTI)

New Delhi: The Congress in the Rajya Sabha on Thursday raised questions about key budgetary proposals like the proposed health insurance scheme and setting MSP at 50 per cent above the cost terming them as "jumlas" and also claimed the Centre was exaggerating data related to job creation.

The Upper House which decided to sit till late to debate the Union budget also saw repeated adjournments post 7 pm following heated arguments between treasury benches and opposition, and protests by TDP members.

However, Congress leader Jairam Ramesh managed to make his speech on the budget amidst protests by some TDP members over demands related to Andhra Pradesh.

Questioning one of the key highlights of the budget, which the government has projected as a pro-farmer measure, Ramesh stated that while it has been said that the MSP would be set at 50 per cent above the cost, it had not been made clear what would be the criterion for deciding the cost of production.

The cost varied according to the method chosen, he said.

Referring to a newspaper interview by a NITI Aayog functionary, he said it appeared that the promise made by the Finance Minister Arun Jaitley was the government's "jumla number one".

He also claimed that insufficient funds were allocated for the health insurance scheme. Ramesh claimed the scheme would anyway benefit private hospitals rather than the public.

It is being touted as 'ModiCare', he said. Taking a jibe, he said by this logic AIIMS may be called an institute of "Modical" sciences.

Ramesh said that an insurance scheme existed during the UPA tenure and only the money had been increased. It was a work in continuation, he claimed.

A former Union minister, Ramesh, said that a health assurance approach would have been better than an insurance scheme as past experience has demonstrated. He said the budgetary allocation required for the scheme was somewhere between 12,000 crore to 1 lakh crore but a grossly insufficient Rs 2,000 crore had been allocated. He termed the scheme as "NAMO, or no allocation, messaging only".

On jobs front, Ramesh said the government was focussing on the EPFO figures to estimate jobs created, which he claimed was a wrong approach. He said the raise in provident fund accounts had happened as there was formalisation of the informal sector due to GST and demonetisation. Even as this was a beneficial result of these two measures, he said exaggerated claims related to job creation were being made based on EPFO data, he said.

"To say all these jobs are new, would be completely wrong," Ramesh said seeking to punch holes in the government's claims on employment. He said recent comments by the chief economic advisor had also indicated the same.

Referring to BJP member Subramanian Swamy, he said the senior leader had recently stated there was pressure on the central statistical organisation to present data in such a way that it appears there was no unfavourable impact of GST and demonetisation.

He also questioned the government's claims on ease of doing business and said the rise in India's rankings was only courtesy a change criterion used for measuring the performance of various countries. The government was, however, presenting it as some sort of miracle, he said.

He said that though India had moved upwards, it was only due to the new insolvency law that was brought in. These measures, however, encourage a hire and fire policy towards employees, he said.

Earlier, after Rajeev Chandrashekhar (Independent) had spoken, the Chair called Ramesh to move the debate on the Budget further.

Ramesh said the Budget was "unusual and historic" because soon after its presentation, the Prime Minister came on deferred live telecast to decode the Budget.

Normally, he said that after the Budget, the prime minister congratulate his finance minister for its presentation.

Before he could continue, members from the treasury benches objected to the comments. This led to heated arguments between the BJP and the Congress. Some other opposition members too supported the Congress.

The Chair tried to pacify the two sides, but in vain. The House was adjourned for 10 minutes.

When the House reassembled, Ramesh continued his speech. In the meanwhile, CM Ramesh of TDP and three of his party colleagues entered the Well carrying placards. They were also shouting slogans. The Chair asked them to return to seats but in vain.

Ramesh said he could not speak amid the din and got support from other opposition members also. Minister of State for Parliamentary Affairs Vijay Goel urged the protesting members to return to seats.

However, they did not yield. The Chair adjourned the House for another 10 minutes. When the House met again, there was ruckus and another adjournment followed. When the House met again, the protesting TDP members again came to the Well. Opposition members asked the Chair to bring the House in order. But as the stalemate continued, the Chair adjourned the Rajya Sabha for 30 minutes for dinner. It was at the next assembling of the House that Ramesh managed to complete his speech.