India   All India  09 Jan 2020  NC not to take part in any elections: Muhammad Akbar Lone
India, All India

NC not to take part in any elections: Muhammad Akbar Lone

The NC leader claimed that Mr. Bukhari and others in the group will not succeed in their “nefarious design”. 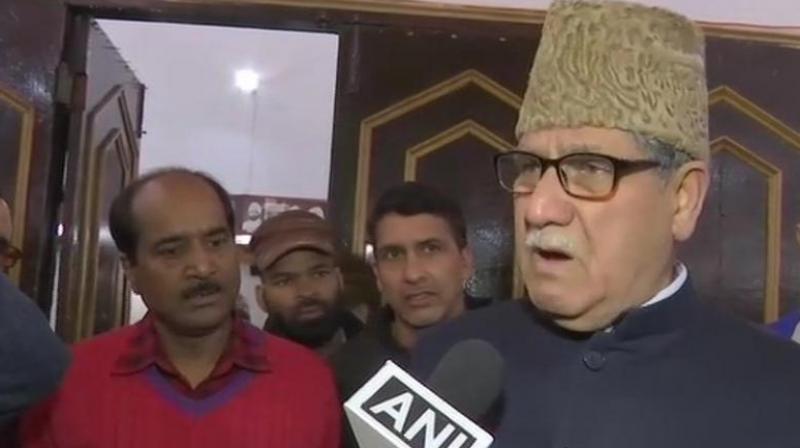 Srinagar: National Conference leader Muhammad Akbar Lone has ruled out possibility of its taking part in any election unless and until its statehood and special status it enjoyed under Article 370 of the Constitution prior to August 5 are restored fully. It also reiterated the demand of unconditional release of its leadership and other political detainees. “There’s no question of our participating in any election unless and until J&K’s statehood and Article 370 are restored,” said senior party leader and former Speaker of the J&K Asse-mbly Muhammad Akbar Lone on Wednesday.

However late Wednesday evening, the NC distanced itself from Mr Lone’s statement that the party will not participate in the proposed Assembly elections of the UT. An NC spokesman said that the party has yet to take a decision on this issue as its top leadership, including president Farooq Abdullah and vice-president Omar Abdullah, continues to be under detention.

His assertions comes a day after a delegation of eight former legislators met lieutenant-governor Girish Chandra Murmu in Jammu to put forth a long list of demands, including restoration of J&K’s statehood, safeguarding rights over land and jobs and release of political detainees.

The delegation was led by former minister Syed Altaf Bukhari who is known to be very close to the corridors of power in Delhi and has been in the forefront of supplementing the government’s covert effort to “encourage” mainstream politicians, including former ministers and legislators to rally around the proposed front in prelude to breaking the political stalemate which persists in J&K since August 5 when it was stripped of its special status.

But Mr Lone, who is also a sitting member of the LoK Sabha representing Baramulla constituency, termed Mr Bukhari and others as a bunch of people which has “sold out to Delhi”.

He said, “These are the very people who have sold out and the latest in the flock used by India against the people of Jammu and Kashmir and their interests from time to time. This is the ‘use and throw’ policy pursued by New Delhi right from 1947.”

The NC leader claimed that Mr. Bukhari and others in the group will not succeed in their “nefarious design”. He asked, “Do you think these people will be able to establish a useful dispensation? Never! The BJP guys can still go to the people with whatever agenda they have but not these people who have already lost their face and have no standing whatsoever in public. People have rejected them before and will reject them again”.

He added that among these people are some of those who were part of the group which had “conspired” with the Congress to topple Dr. Farooq Abdullah’s government in 1984. “But the government they formed together did not last for long. They may try to repeat the history but I want to assure you that all of us in the NC are consistent in their political outlook and, by the grace of God, will not betray the interests of the party or the people. No one from among us is going to join them,” he said.

Meanwhile, People’s Democratic Party (PDP) on Wednesday once again demanded immediate restoration of the political activities in J&K and said that the “vision” envisaged by its founder and former chief minister Mufti Muhammad Sayeed “will act as a guiding principle for the party’s future strategy”.

While paying tribute to Mr. Sayeed on his fourth death anniversary, the PDP said that he took a series of confidence-building measures and made strenuous efforts in making peace an inseparable feature of J&K.