INS Sumedha on anti-piracy patrol in Gulf of Aden. 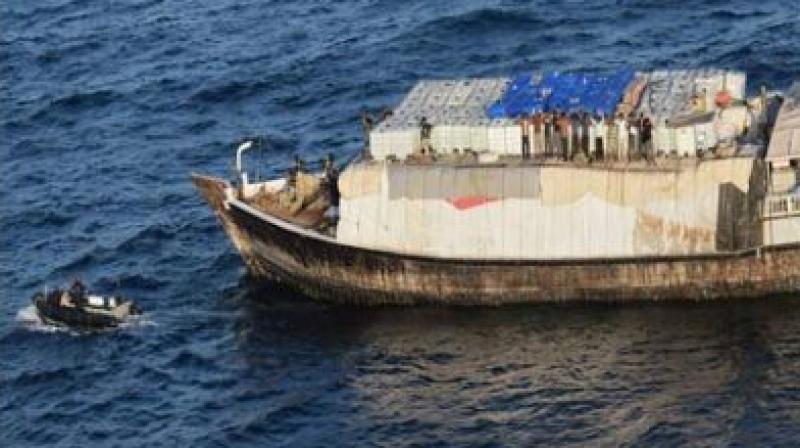 A traditional wooden vessel known as “Dhow”, Al-Hamid was detected by an Indian Navy helicopter launched from the deck of INS Sumedha.

New Delhi: Indian Navy ship Sumedha came to the assistance of a stranded vessel near Somali Coast which had Indian crew.

Indian Navy ship Sumedha, currently on anti-piracy patrol in Gulf of Aden, came to the rescue of the crew of the dhow Al-Hamid on  January 6. A traditional wooden vessel known as “Dhow”, Al-Hamid was detected by an Indian Navy helicopter launched from the deck of INS Sumedha. It was confirmed that the vessel was in distress and drifting near the coast of Somalia.

“A boarding team along with a naval technical team embarked Al-Hamid for routine checks onboard and render assistance,” said Indian Navy spokesperson Commander  Vivek Madhwal. He said that the crew of Al-Hamid comprised 13 Indian citizens.

“The technical team assessment revealed that the dhow had suffered a broken main engine shaft, which was not repairable at sea. The dhow was then towed to safety away from the Somali coast,” said the Navy spokesperson. Meanwhile, the owner of the dhow Al-Hamid  has sent another vessel for towing the dhow to port for repairs. Before departure, Indian Naval Ship Sumedha provided fresh water and medical supplies to the crew of the dhow.

Meanwhile, the Navy has said that its tableau for Republic Day will showcase its fighting capability in air, surface, and under-water. The front part of the tableau will have model of Kolkata class Stealth Destroyer displaying a Brahmos launch and Kalvari class submarine launching the Exocet missile. It will have models of state-of-the-art assets like Boeing P8I Long Range Maritime Patrol aircraft with Harpoon missiles.

The main tableau of Navy showcases the indigenous aircraft carrier Vikrant under construction at Cochin Shipyard Limited, along with its complement of MiG 29K FighterAircraft.

This not only depicts the strength of the Indian Navy but is representative of the Navy’s total commitment to the ‘Make in India’ initiative. The tableau is in pursuance of the Navy Week theme ‘Indian Navy — Silent, Strong, and Swift’.

The benign role of the Navy in terms of safeguarding offshore economic assetsas well as rendering Humanitarian Assistance and Disaster Relief (HADR) is portrayed through the murals on the sides.