India   All India  09 Jan 2020  Gujarat Porsche owner pays over Rs 27 lakh to get back his impounded car
India, All India

The car was stopped at Helmet crossroad on November 28 as it did not have number plates. 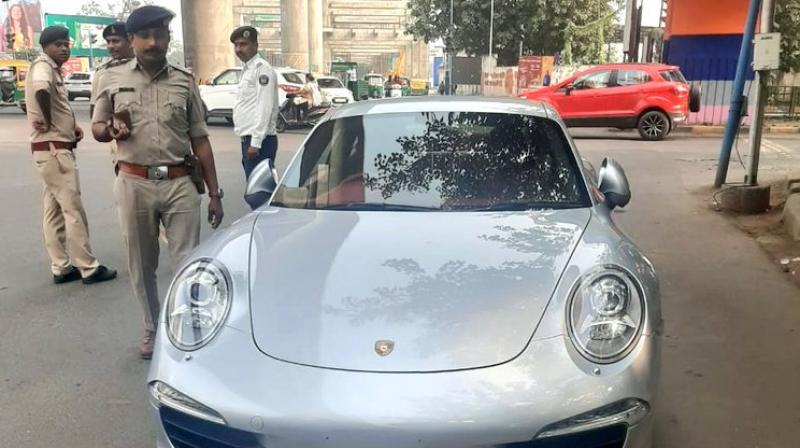 Ahmedabad: The owner of a Porsche 911 sports car paid Rs 27.68 lakh towards pending taxes, interest and penalty to get back his vehicle that was impounded for lack of valid documents.

After paying the money to the Ahmedabad Regional Transport Office (RTO), the car owner- Ranjit Desai- took back his impounded car from the city traffic police on Tuesday.

The car was impounded in November.

The Ahmedabad traffic police shared the photo of the RTO receipt on its Twitter handle and claimed that the fine of Rs 27.68 lakh was the highest ever in India.

"RTO slaps a fine of total Rs 27.68 Lakh on Porsche Car which was detained during a routine check by Ahmedabad Traffic West Police for not having required documents. One of the highest fine amount levied in the country ever," the traffic police tweeted on Wednesday.

During a routine checking in Ahmedabad West. Porsche 911 was caught by PSI MB Virja. The vehicle had No Number Plate and Valid Documents. Vehicle detained and slapped fine of Rs. 9 Lakh 80 Thousand (9,80,000 INR). #AhmedabadPolice #Rules4All pic.twitter.com/runtd5k8dX

The car was stopped at Helmet crossroad on November 28 as it did not have number plates.

On being questioned, the driver had failed to produce valid documents of the vehicle too, the police officer said.

"We had therefore detained the car and issued an RTO memo under the Motor Vehicles Act. This means that he has to deposit the penalty with the RTO and come to us with a receipt to get back the vehicle," a police officer said.

Initially a fine of Rs 9.8 lakh was slapped, but when the owner went to deposit that amount, the RTO dug out old records and imposed penalty of Rs 27.68 lakhs, which is the highest in India, he added.