The programme, scheduled at 3.30 pm, was to be presided over by Visva Bharati vice-chancellor Bidyut Chakraborty. 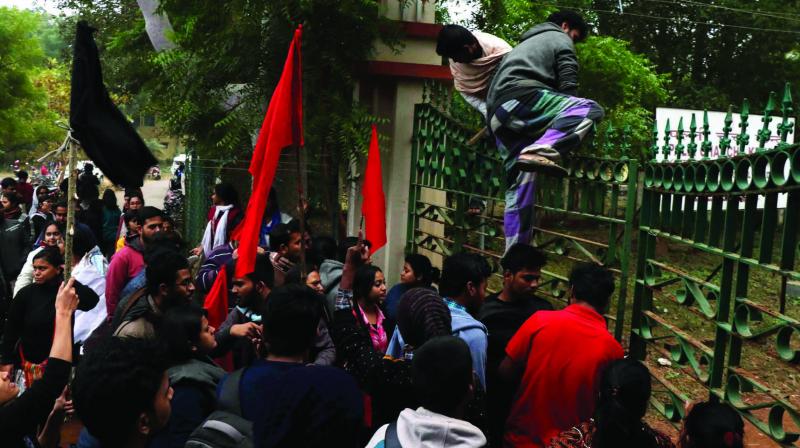 Left-wing students cross the gate to enter as they gherao Rajya Sabha MP Swapan Dasgupta, who was there to deliver a lecture on CAA, at Viswa Bharati University in Birbhum district of West Bengal on Wednesday. (Photo: PTI)

Kolkata: BJP MP Swapan Dasgupta was confined allegedly by members of the CPI(M)’s student wing SFI at Visva Bharati in Santiniketan after he visited the Central university to deliver a lecture on the CAA on Wednesday. However, he was allowed to leave later in the night.

Reaching Visva Bharati, Mr Dasgupta faced protests by the SFI members who later stalled his lecture on “The CAA-2019: Understanding and Interpretation”, which was a part of the Visva Bharati Lecture Series at its Lipika Auditorium.

The programme, scheduled at 3.30 pm, was to be presided over by Visva Bharati vice-chancellor Bidyut Chakraborty.

In the evening, the BJP MP tweeted, “How does it feel to have a mob attack a peaceful meeting on CAA and intimidation students? This is what is happening to a meeting I am addressing at Vishwa Bharati now. Locked into room now with mob outside. There are nearly 70 people locked inside a room in Vishwa Bharati, Santiniketan, for the crime of attending an official, university-convened lecture by me on CAA. This includes the V-C. There is a howling mob outside itching for confrontation.”

Mr Dhankhar said on Twitter, “Talked to DG Police Virendra Kumar about serious situation of confinement of Rajya Sabha MP Dr Swapan Dasgupta along with V-C Viswa Bharati and many others  for several hours, and urged him to take swiftly necessary steps. Such anarchy and failure of law and order is worrisome. The incident is reflective of worsening situation of law and order in the state.”