‘Bharat Bandh’ is largely a flop

The corporate sector largely worked smoothly, while schools and colleges too were open in several parts of the country. 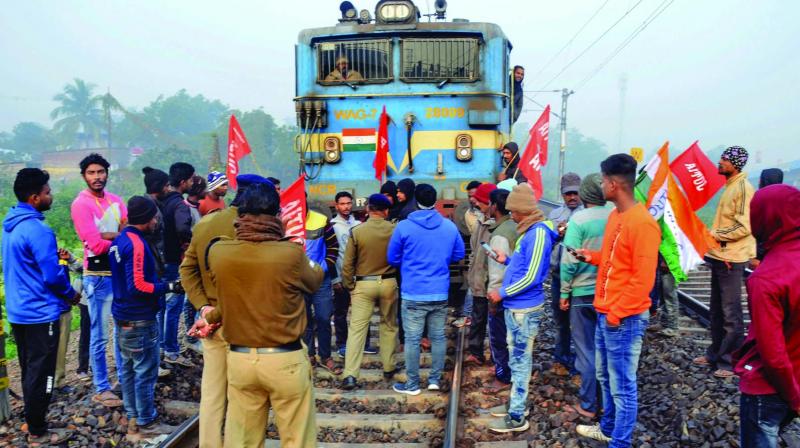 Members of AITUC and INTUC block a train during the trade unions’ nationwide strike in West Midnapore, West Bengal, on Wednesday. (Photo: PTI)

New Delhi: Barring Kerala, that saw a complete shutdown, and West Bengal that witnessed violent clashes, the Bharat Bandh called by trade unions affiliated to the Left parties and the Congress remained by and large peaceful and limited to certain sectors only, having no major impact on people in much of the country.

However, public sectors banks remained closed throughout the country, and autos, taxis, buses refused to ply in some cities, while universities saw students marching in protest during the Bharat Bandh called by trade unions against the Centre’s “anti-people labour policies”, and against the CAA, NRC, NPR as well as the attack on JNU students.

The day-long Bharat Bandh was expected to see the participation of 25 crore people. Huge crowds were seen taking part in protests. While the bandh largely remained peaceful, incidents of clashes between Trinamul Congress and Congress-Left workers were reported in West Bengal. The ruling TMC decided not to participate in the bandh. Incidents of stone-pelting at state transport buses were also seen in Karnataka’s Madikeri district.

The corporate sector largely worked smoothly, while schools and colleges too were open in several parts of the country.

In Left-ruled Kerala, normal life was severely affected with public transport services keeping off the roads and banking services hit. Schools and colleges had declared a holiday and three major universities in the state postponed their examinations. Shops, hotels and other business establishments were shut in the state. Chief minister Pinarayi Vijayan and his ministers also did not attend office.

In Delhi, trade unions held a protest at ITO while the students of Delhi University marched against the CAA, NRC, NPR and the violence at JNU. DU’s St. Stephen’s College, that largely stays away from all protests, also saw a boycott of classes and slogan-shouting in protest. However, the city remained by and large free of disruptions, but industrial workers in the Mayapuri ans Wazirabad area stayed away from work. The Delhi  Metro and the the Delhi Transport Corporation (DTC) services functioned normally in Delhi, and schools and colleges remained open.

“We are protesting against the anti-labour laws of the Narendra Modi government, and the labour codes they plan to introduce which are against the welfare of workers. They even want to sell a Maharatna like Bharat Petroleum, and move towards privatisation,” said CPI(M) leader Subhashini Ali.

Sporadic incidents of violence were reported from various parts of West Bengal as trade union activists backed by Left and Congress members tried to enforce the 24-hour strike. The strikers blocked trains and road traffic in several parts of the state, affecting normal life. In East Midnapore district, stones were hurled at buses. When the police tried to remove the protesters, a scuffle ensued, following which several strikers were arrested, the police said. The protesters tried to break past barricades in Kolkata’s Jadavpur and Central Avenue areas, prompting the police to use force. Several strikers were arrested. In Dum Dum and Lake Town areas, clashes broke out between the Left supporters, who took out rallies in support of the strike, and TMC supporters who were opposing it.

Country-made bombs were found on various roads in Barasat area of North 24 Paraganas district, the police said. The strikers also took out rallies in the industrial belt of the district and blocked roads and railway tracks. The police removed them to ensure movement of vehicles without a hitch. Daily commuters and office goers across the state had a tough time as the number of vehicles plying on the roads was much less than other days.

Normal life was also somewhat hit in BJP-ruled Assam as vehicles remained off the roads and markets were shut. Shops and markets kept their shutters down though pharmacies were open, while educational institutions, especially schools, remained closed. The scheduled exams in colleges and higher educational institutions were, however, held normally. Public transport, both local and long distance, kept off the roads. Petrol pumps were also shut. Though most private offices were not operating, state government offices were open with employees attending work.

However, in Uttar Pradesh, about 15 lakh power sector employees and engineers went on strike in support of the Bharat Bandh. Power sector employees were protesting against the Centre’s proposed amendments to the Electricity Act as well as other privatisation policies of the government, which they say are against the interests of the consumers and employees. They are also demanding implementation of the old pension scheme for all employees.