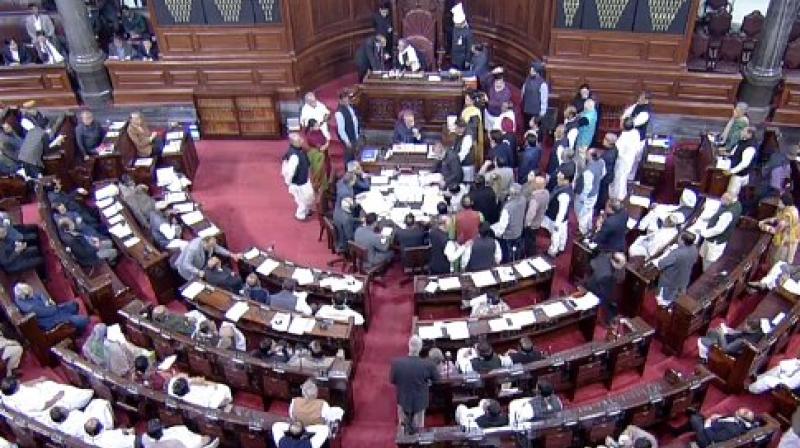 Deputy Chairman Harivansh said that it may be considered his 'personal lapse' and a 'lapse in his understanding' in not conveying at the time of adjourning proceedings on Tuesday that the sitting of the House has been extended by a day. (Photo: ANI | Twitter)

New Delhi: Opposition parties Wednesday slammed "bypassing" of rules and procedure in extending the current winter session by a day in Rajya Sabha saying the members were neither informed nor their consent taken for the move. Congress, TMC and AIADMK members cited rule book to criticise the extension.

Deputy Chairman Harivansh said that it may be considered his "personal lapse" and a "lapse in his understanding" in not conveying at the time of adjourning proceedings on Tuesday that the sitting of the House has been extended by a day.

He said the extension of the sitting of the House was on agenda of the BAC meeting of Tuesday after a request was received from the government.

BAC minuted acceptance of the request, he said adding when he on Tuesday adjourned the proceedings of the House till 11 am on Wednesday, it was "implied" that the sitting of the House has been extended by a day.

"If it was not communicated (in so many words), please consider it owing to my personal lapse and a lapse in my understanding," he said. Finance Minister Arun Jaitley and Leader of the House Arun Jaitley conceded the rules provide for taking a sense of the House for extending the sitting but added "We don't question the ruling of the chair."

The government, on the other hand, maintained that the Chairman was within his rights to extend the sitting in view of important legislation, including the one to provide 10 per cent reservation in educational institutions and government jobs to poor from upper castes, pending.

When the House met for the extended one day on Wednesday, Sukhendu Sekhar Roy (TMC) cited Rule 12 of Rajya Sabha to state that the sitting can be extended by the Chairman after making an announcement in the House and the change being published in the Rajya Sabha Bulletin.

"No announcement from the Chairman was made," he said adding no one was questioning the power of the chairman to extend the session but that the rules were not followed.

He said the issue was an utter disregard of parliamentary procedures and the session being extended "illegally". Anand Sharma (Cong) said no one is challenging the right of the government but that the House has to be run by rules.

No decision on extending the sitting of the House was taken at the Business Advisory Committee (BAC) meeting and no time was allocated, he said adding this is the first time that there is no dialogue between the government and the opposition on that matter.

It is the government's responsibility to take opposition into confidence for the smooth running of the House, he said. "The Government has not taken the initiative to run the House."

Sharma said it is the established practice in Rajya Sabha that no bill be brought without the scrutiny of parliamentary committees but this was not being followed.

"We don't question the ruling of the Chair," he said. The House had not functioned on normal days and so it was decided to have one extra day, he said.

Minister of State for Parliamentary Affairs Vijay Goel said members should have been concerned about half of the 20 days of the session being washed out in pandemonium.

It is the right of the government to change or increase sitting of the House, he said, adding the decision to extend the House was first taken at the BAC meeting and then the Chairman holding an informal meeting with leaders of opposition parties.