Khan, who joined BJP, lashed out at CM Mamata Banerjee, alleging there was no democracy, but 'police raj' in state. 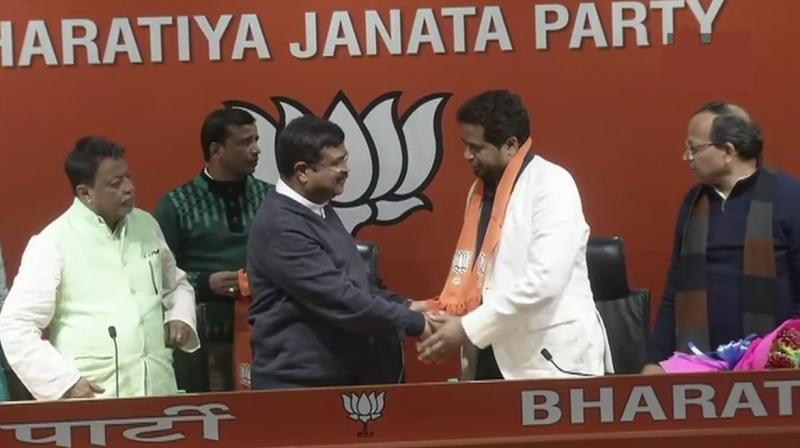 Union minister Dharmendra Pradhan made the announcement of Saumitra Khan joining the party in the presence of Mukul Roy. (Photo: Twitter | ANI)

New Delhi: Trinamool Congress MP Saumitra Khan joined the BJP on Wednesday, giving a fillip to the saffron party's campaign in West Bengal in the run-up to the Lok Sabha polls.

Khan, who joined the Bharatiya Janata Party following a meeting with party president Amit Shah, lashed out at Chief Minister Mamata Banerjee, alleging that there was no democracy, but "police raj" in the state.

The 38-year-old leader said he, like many other young people, has faith in Prime Minister Narendra Modi who, he added, would bring about a change in the state.  "There is no democracy in the state. People cannot vote. Police raj is there," he told reporters at a press conference in New Delhi.

Khan represents the Bishnupur constituency in the Lok Sabha and was earlier a member of the state assembly as well.

Union minister Dharmendra Pradhan made the announcement of Khan joining the party in the presence of Mukul Roy, a former top TMC leader who had defected to the BJP in 2017.

Pradhan claimed that the development marked the changing politics of the state, saying the BJP's acceptance and credibility were at an "all-time high" in eastern India as the Modi government had given the region a priority in its agenda of growth and progress.

"There is an atmosphere in the favour of the BJP. Eastern India will provide a strong pillar for the government's return to power at the Centre in the Lok Sabha polls," Pradhan said.

The BJP has identified the state as one of the priority states and party chief Amit Shah had set a target of 22 seats. It had won two of the state's 42 Lok Sabha seats in 2014, while the TMC won 34. There have been reports that Khan might have been dropped by the Trinamool from its candidates list in the Lok Sabha polls.