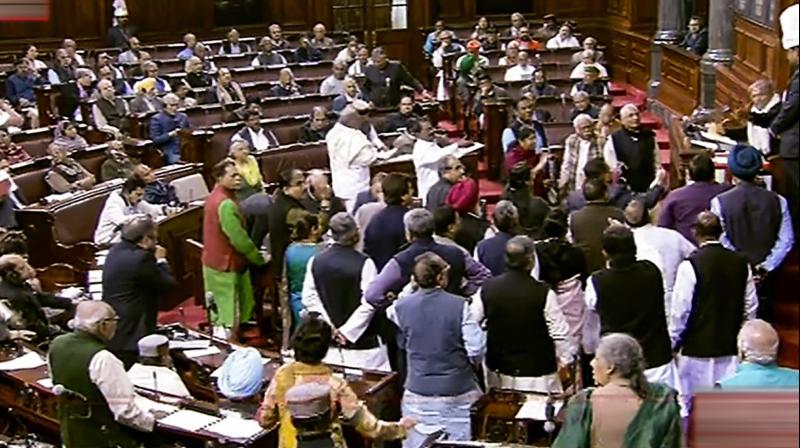 New Delhi: Questioning the timing of the bill to provide reservation to the poor in the general category, the Congress and the opposition in Rajya Sabha on Wednesday slammed the ruling BJP saying the government was playing election "politics".

They said it was a disrespect shown to the Indian democracy's highest institution.

'The Constitution (One Hundred and Twenth-Four Amendment) Bill, 2019' seeks to provide 10 per cent reservation in jobs and educational institutions to economically weaker sections in the general category.

The bill was introduced in the Upper House amid din following protests by the opposition which demanded it be sent to a select committee for scrutiny.

Speaking on the legislation, Congress senior leader and former Minister Anand Sharma said, “You brought the bill in haste because you had to before the Model Code of Conduct comes into force, thinking ... let's dangle a carrot in front of the public, show them another dream that Modiji made arrangements for their childrens employment.”

He said by the haste shown in bringing the bill, it was beyond comprehension that a government "on departure lounge" after "befitting" defeat in three state elections brought the bill on the eve of elections.

On job promises, he said, "The government promised to give two crore jobs every year in 2014. Forget about generating jobs, 11 million people lost their jobs in the year 2018 itself". He said there was a sharp decline in jobs whether in government or public sector enterprises.

He said the Congress was not opposed to the bill as it was very much there in its manifesto and had always been in its favour but the way the BJP government was showing disrespect to the institution was deplorable.

"I deplore it, this is calculated, deliberated disrespect to the highest institutions of the Indian democracy... We are all political parties but it is the government which is playing politics," he said.

Samajwadi Party leader Ram Gopal Yadav, while supporting the bill, demanded that reservation for OBCs be enhanced to 54 per cent keeping in mind the increase in their population.

"When you have already decided to break the 50 per cent barrier set by the Supreme Court, I demand from the government that OBC of this country should be given 54 per cent reservation keeping in mind their population," Yadav said.

"What stopped you for bringing this bill earlier? This is not even a money bill...If you had honesty, this bill could have come earlier and could have really benefitted people," Yadav said.

He added that even if the bill is passed it will have to face judicial scrutiny as there is "no dearth of professional PIL" filers.

Terming the bill as unconstitutional and unsustainable, AIADMK's A Navaneethakrishnan opposed the bill.

He said that Tamil Nadu government already provides reservations of 69 per cent to backward classes and the bill would impact the 31 per cent people who fall in "open quota" in the state.

Derek O' Brien (TMC) said his party is "disgusted and angry" by the way the government has been "insulting" the Parliament.

He said that the bill is nothing but government's acknowledgment of guilt over non-creation of jobs in the country over the last 4.5 years.

BJP leader Prabhat Jha said Prime Minister Narendra Modi by this bill was not only fulfilling the party's promise to people but also promise made in every party's manifesto.