Lists of 250 civilian prisoners and 94 fishermen were handed over to Pakistan. 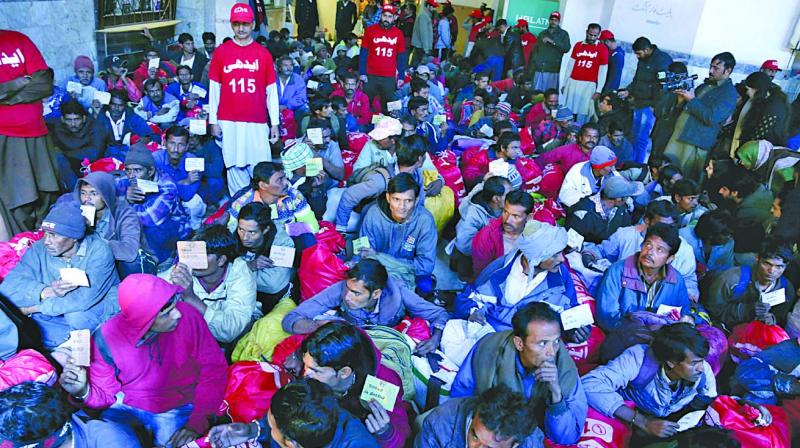 New Delhi: Pakistan on Monday released 147 Indian fishermen who reached India through the Wagah border. Islamabad had announced a week ago that it would release the fishermen on January 8. India and Pakistan had last week exchanged the list of prisoners  as per existing agreements.

In a statement on Janu-ary 1 from Islamabad, the Pakistan Foreign Office had said, “The Government of Pakistan today handed over a list of 457 Indian prisoners (58 civil + 399 fishermen) in Pakistan, to the high commission of India in Islamabad. This step is consistent with the provisions of the Consular Access Agreement between Pakistan and India, signed on 21 May 2008, under which both countries are required to exchange lists of prisoners in each other’s custody twice a year, on 1 January and 1 July, respectively.  Pakistan will release 146 fishermen on 08 January 2018.”

In a statement from New Delhi on the same day, the MEA had said, “India and Pakistan today exchanged, through diplomatic channels simultaneously at New Delhi and Islamabad, the lists of nationals (including civil prisoners and fishermen) of each country lodged in the jails of the other country in keeping with the provisions of the 2008 Agreement on Consular Access between India and Pakistan. India remains committed to addressing the humanitarian matters, including those pertaining to prisoners and fishermen in each other’s country. Lists of 250 civilian prisoners and 94 fishermen were handed over to Pakistan. Further, lists of 54 Pakistani civilian prisoners and 4 fishermen who have completed their sentence and whose nationality confirmation is awaited from Pakistan were also handed over and Pakistan was asked to expedite confirmation of their nationality.”