Supreme Court modified its order on National Anthem and said it is not mandatory in cinema halls. 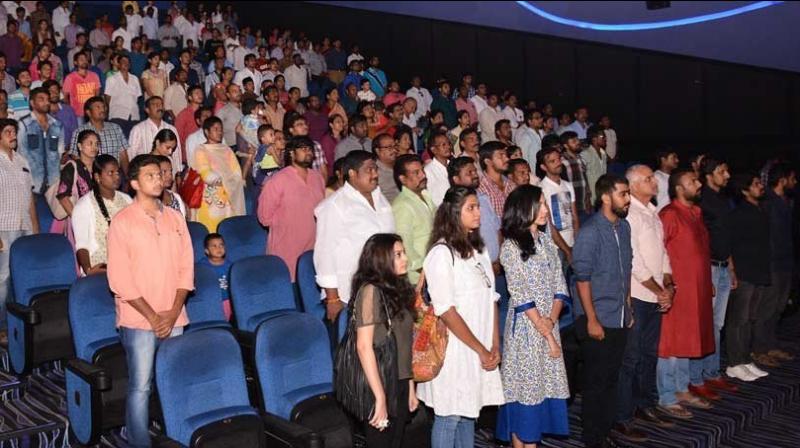 Supreme Court on Tuesday modified its order on National Anthem and said it is not mandatory in cinema halls. (Photo: PTI)

New Delhi: Modifying its 2016 order, the Supreme Court has accepted the Centre's suggestion that the playing of National Anthem before the screening of movies should not be made compulsory.

The apex court's decision comes a day after the government said a final call can be taken on the issue once a ministerial panel comes up with its guidelines on this.

"Playing of National Anthem is not mandatory in cinema halls before screening of film," the apex court said.

The Supreme court accepted the government's affidavit that says a 12-member committee should be set up to suggest changes in Prevention of Insults to National Honour Act.

The court said that the committee should comprehensively look into all aspects.

It also said that the exemption for the disabled from standing in cinema halls during National Anthem shall remain in force.

In an affidavit submitted to the Supreme Court on Monday, the Centre said that it has formed an inter-ministerial committee to frame new guidelines on “all aspects relating to the playing and singing of the National Anthem. The guidelines would require extensive consultations and would require six months’ time”.

It said once the recommendations are ready, the government would issue the requisite notification or circular. Till such time, the earlier order making National Anthem mandatory in cinema halls should be recalled.

In October 2017, the Supreme Court had asked the Centre to take a call on regulating the playing of National Anthem in public places including cinema halls, within three months, and said till then its earlier order directing cinema halls to play the National Anthem at the commencement of films will continue.

Justice DY Chandrachud who was part of the three-judge bench openly expressed displeasure at the interim order passed in 2017 observing that there could not be any moral policing.

The initial order, issued in November 2016, said all those present in theatres must "stand up in respect" till the anthem ended. The practice would "instill a feeling within one, a sense of committed patriotism and nationalism," the bench, led by Justice Dipak Misra, who later became the Chief Justice of India, had ruled.

After an appeal to recall the order, a different bench of the court - which also included Chief Justice Misra -- modified it October, 2017.

"People do not need to stand up at a cinema hall to be perceived as patriotic," the court said, adding that it "cannot be assumed that if a person does not stand up for national anthem, then he is less patriotic".

The court said the government should take a call on the issue, instead of "shooting from the court's shoulder". Criticising the government's inaction, Justice DY Chandrachud, who was part of the bench, asked what was stopping it from amending the Flag Code.

"Nowadays, the anthem is played during matches, tournaments and even Olympics where half of the crowd does not understand its meaning... You can amend it and say where to play national anthem and where it can't be done," the judge said.