Rajasthan: Suspected cow smuggler killed in encounter; 5 others on run

Police is hunting for five of his accomplices who are believed to have been injured but managed to flee through narrow alleys of the colony. 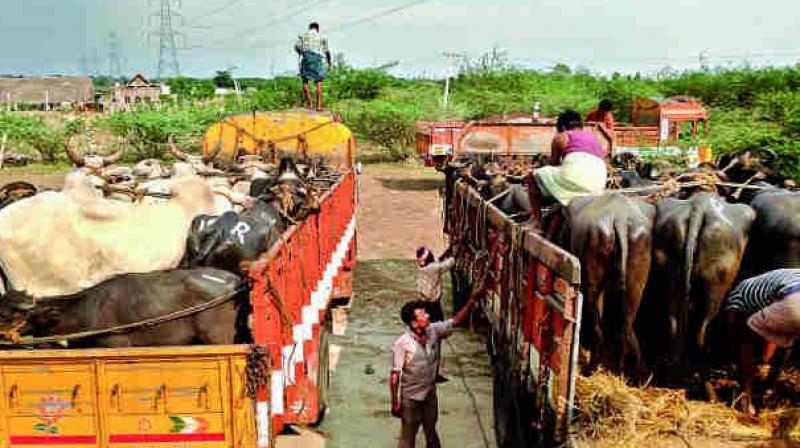 Police recovered five cows, including a dead one, from the truck. (Photo: Representational | PTI)

Jaipur: A Muslim youth was gunned down by police in Alwar district of Rajasthan.

Police claimed that 22-year-old Talim Khan who was a cow smuggler was killed in retaliatory firing in the early hours on Thursday.

Police is hunting for five of his accomplices who are believed to have been injured but managed to flee through the narrow alleys of the colony after the tyre of their vehicle got punctured.

Talim Khan’s family and Meo community have refused to accept his body. They alleged that the police was avoiding post mortem.

“We were told that a medical board would be constituted but that did not happen. Then we were told that the post mortem will be done on Friday. We are not going to accept the body without post mortem,” Meo leader Sher Mohammed said.

However, the post mortem is not likely to be done till Saturday because government doctors in the state are on mass leave on Friday.

The bullet-riddled body of Talim Khan was found inside the cabin of a mini truck along with a country made pistol and two cartridges.

Police recovered five cows, including a dead one, from the truck.

District superintendent of Police Rahul Prakash claimed that Khan was shot dead in retaliatory firing by the police.

“They were continuously firing at police and broke three barriers while trying to flee after being spotted by a mobile patrolling team while loading cows in a vehicle. When they came down Kali Mori flyover, the NEB police station team fired at the truck. Two bullets broke the windshield and killed Khan who was sitting near the driver's seat," he said.

According to him, the tyre of their vehicle had flattened because of iron nails still the driver managed to drive about half-a-kilometer where they abandoned the vehicle in the middle of the locality and fled from the spot.

Director General of Police OP Galhotra has said that investigation has been launched into the encounter with prescribed guidelines by the Supreme Court, National Human Rights Commission and the government.