Both the cop and the passenger suffered minor injuries in the incident. 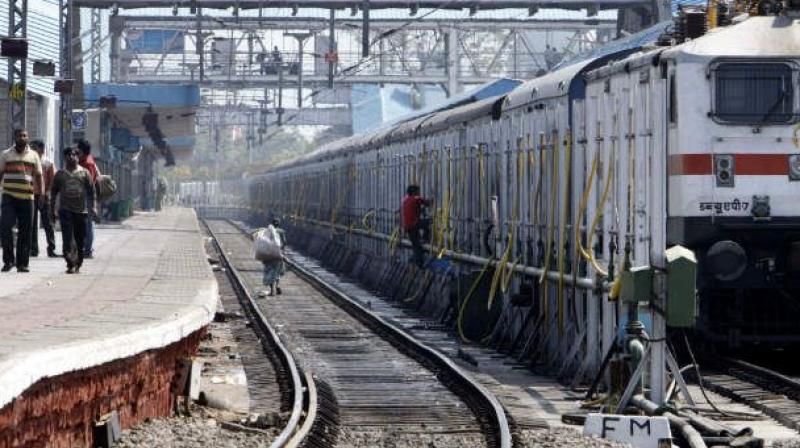 The whole incident was captured in the CCTV installed at the railway station. The footage showing his valiant action has gone viral on social media.

Bhopal: Showing bravery, a young cop snatched a railway passenger from the jaws of death by saving him from being run over by a running train.

Onlookers at the Ratlam railway station were late on Tuesday night witness to heroics of the Government Railway Police personnel Gopal Boribal (26) as the latter chased a running train, dived and then untangled a passenger, trapped in the ladders, almost in one breath.

The whole incident was captured in the CCTV installed at the railway station. The footage showing his valiant action has gone viral on social media.

According to the police, the head constable sensed trouble when he spotted a passenger, Mukim Bhai, losing his balance while getting down hurriedly from the 19023 Janata Express, which was leaving Ratlam railway station.

Soon, the passenger slipped and got trapped in the steps of the train. He was then found being dragged in the platform by the running train.

“Instinctively, I started chasing the running train when I noticed the man losing his balance and was about to fall off the train. The passenger got trapped in the ladder, and I dived to untangle him,” Mr Boribal said.

“I could not believe that I acted so swiftly to save the passenger when I watched close circuit television camera (CCTV) footage. Perhaps, I reacted to the situation instinctively,” he added.

Both the cop and the passenger suffered minor injuries in the incident. Later, Mukim Bhai told the police that he tried to get down from the running train after he was told by co-passengers that he entered in a wrong train. He was to catch Gujarat Sampark Kranti to go to Delhi.