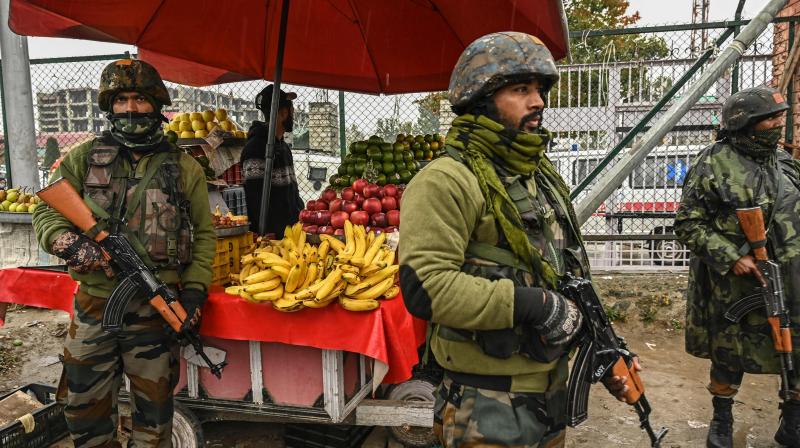 Soldiers stand guard during a search operation reportedly conducted after a tip-off about the presence of suspected militants in Bemina area of Srinagar. (TAUSEEF MUSTAFA / AFP)

SRINAGAR: After a lull of weeks, the target killers struck again in Srinagar on Sunday night, killing a policeman.

The officials said that Jammu and Kashmir policeman Tawseef Ahmed Wani was shot and critically wounded by gunmen outside his residence in SD Colony of Srinagar's Bemina area. He died on the way to hospital, the officials said.

The police sources said that after 29-year-old Wani was targetted by the assailants outside his home, his family members and neighbours rushed him to the city's Sri Maharaja Hari Singh (SMHS) Hospital where the doctors declared him brought dead.

Dr. Kanwar Jeet Singh, Medical Superintendent SMHS Hospital, said that Wani had received a bullet injury in his head and “he was brought dead to hospital."

Last month, in a series of target attacks, at, least, eleven persons were killed by  gunmen in Kashmir Valley. The police had blamed these killings on separatist militants.

Most of the target killings including of members of minority Pandit and Sikh communities and seasonal labourers from Bihar and Uttar Pradesh took place in and around Srinagar following which over five thousand additional Central armed police forces (CAPF) personnel were brought in from different parts of the country  and deployed here and some other parts of the Valley to strengthen the security.