The footage came to light after an initial video of violence at Delhi's Tis Hazari Court showed the DCP being harassed on Nov 2. 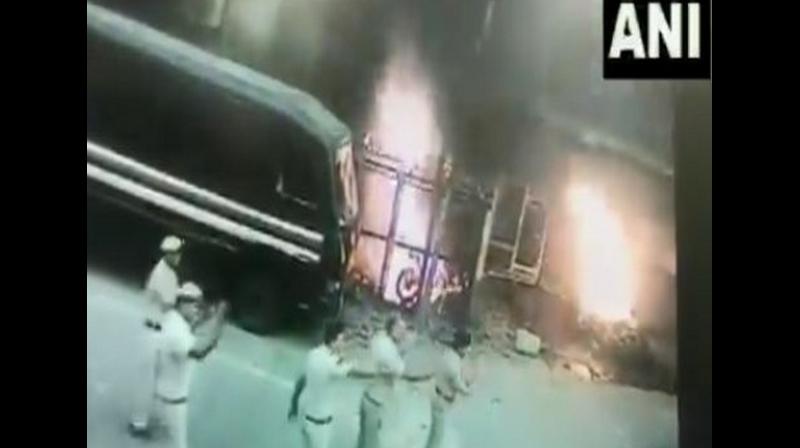 In the video, Bhardwaj was seen being chased by a few lawyers while some personnel tried to shield her. Some other police personnel were also seen running around. (Photo: ANI)

New Delhi: In another CCTV clip of the Tis Hazari clash, DCP North Monika Bhardwaj can be seen pleading before the lawyers to stop the violence after a clash broke out between the police and lawyers on November 2.

In the video, Bhardwaj along with other police personnel can be seen folding her hands before the agitated lawyers when suddenly a group of lawyers come running towards the personnel and push them back.

This footage came to light after an initial video clip of the violence at Delhi's Tis Hazari Court showed the DCP being harassed on November 2.

In the video, Bhardwaj was seen being chased by a few lawyers while some personnel tried to shield her.

Some other police personnel were also seen running around.

National Commission for Women (NCW) chairperson Rekha Sharma had strongly condemned the act while stating that suo moto action will be taken.

"Seeing a video where lawyers are manhandling and misbehaving with a woman police officer and behaving like goons. I strongly condemn it. I am going to take Suo Motu and will be writing to Bar Council and Commissioner of Police Delhi," Sharma tweeted.

In a recent development, two IPS officers were transferred on the Delhi High Court's direction in the aftermath of the clash.

The high court took suo moto cognizance of the matter on Sunday and directed Police Commissioner Amulya Patnaik to transfer two officers while directing him not to take any coercive action against any lawyer.

As many as eight lawyers and about 20 policemen including Additional Deputy Commissioner of Police (North) and two Station House Officers (SHOs) sustained injuries in the clash that took place on November 2.