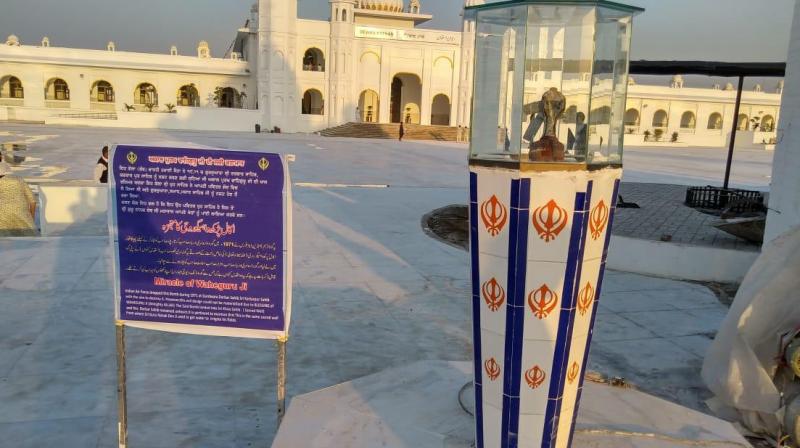 The bomb has been placed within a glass case placed atop on a small pillar decorated with the ‘khanda’, a symbol representing the Sikh faith. (Photo: Twitter)

Mumbai: A day before the opening of the Kartarpur Corridor, a fresh controversy has emerged because of an exhibit put at the gurudwara site by Pakistani authorities, reported Hindustan Times.

According to several Indians who were part of a private group that recently visited Durbar Sahib Gurudwara in Pakistan’s Kartarpur, Pakistani authorities created an exhibit featuring a small bomb that was purportedly dropped on the shrine by the Indian Air Force during the 1971 war. The bomb has been placed within a glass case placed atop on a small pillar decorated with the ‘khanda’, a symbol representing the Sikh faith. A board erected next to the pillar has a description that reads: “Miracle of Waheguruji.”

This is what would welcome visitors into #KartarpurSahib.
A bomb and a board saying India dropped the bomb in 1971 but the Gurudwara remained "unheart" (unhurt) and India's "evil" designs didn't materialise.#IndoPak MoU states #KartarpurCorridor will not be used for propaganda. pic.twitter.com/dvaQhtH2cL

The board further states: “Indian Air Force dropped this Bomb during 1971 at Gurdwara Darbar Sahib Sri Kartarpur Sahib with the aim to destroy it. However, this evil design could not be materialised due to blessing of Waheguru Ji (Almighty Allah). The said bomb landed into Sri Khoo Sahib (Sacred Well) and this Darbar Sahib remained unheart (sic). It is pertinent to mention that this is the same sacred well from where Sri Guru Nanak Dev Ji used to get water to irrigate his fields.”

Earlier this week, another controversy hit the celebrations when a song released by Pakistan to mark the opening of the corridor featured posters of Khalistani separatist leaders.