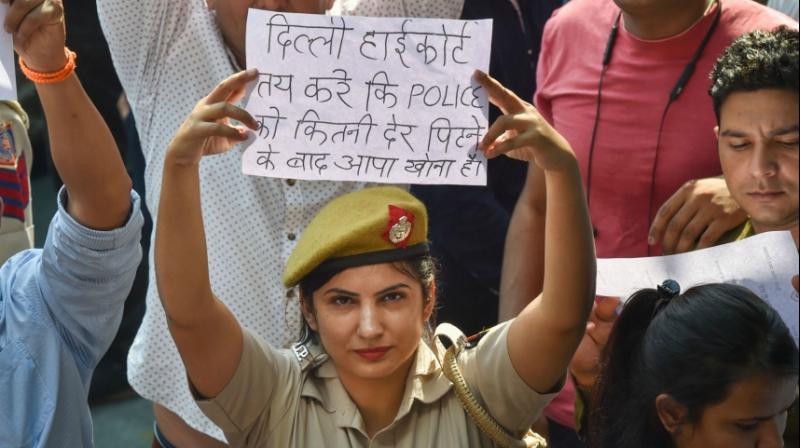 The sources said the 9mm pistol went missing after the clash and an FIR has been registered in the case. (Photo: PTI)

New Delhi: A woman officer was allegedly harassed during the Tis Hazari court complex clashes and a loaded pistol of a woman constable has been missing since the violence last week, sources said on Thursday. Police are probing both the cases and efforts are on to trace the missing 9mm pistol, they said. In the Saturday clashes, at least 20 police personnel and several lawyers were injured.

In one of the many videos that surfaced following the incident, lawyers are seen purportedly harassing the woman officer, who is flanked by other police personnel and trying to control a group of lawyers. She was later seen running, with a few lawyers trying to catch hold of her while some policemen try to shield her.

#WATCH: CCTV footage of DCP North Monika Bhardwaj being roughed up on 2nd November when a clash between police and lawyers took place at Tis Hazari Court, in #Delhi pic.twitter.com/d3sCMWTBl9

The sources said the 9mm pistol went missing after the clash and an FIR has been registered in the case.

The Crime Branch's Special Investigation Team, which is probing the clashes, is in the process of recording the statements of all the officers who were part of controlling the crowd on Saturday, according to a senior police official.

In another video, lawyers were seen barging inside the administrative area of the court and assaulting policemen.

A group of lawyers were seen in another CCTV grab trying to set a vehicle ablaze while police personnel threw water to disperse them even as a man, suspected to be from the legal fraternity, was seen threatening police personnel by brandishing a metal chain. The same person, in another video, was seen allegedly threatening the policeman who was apparently recording the video of one of the incidents.

In the third video, some lawyers were seen trying to break open the lock-up inside the court complex after the policemen took one of the advocates inside following the tiff.

The SIT is examining all the CCTV footage as part of the FIR that was registered following the violence. Appropriate legal action will be taken in the matter after a thorough investigation, said the senior officer.