India   All India  08 Nov 2019  India, Pakistan in a war of words on eve of Kartapur opening
India, All India

India, Pakistan in a war of words on eve of Kartapur opening 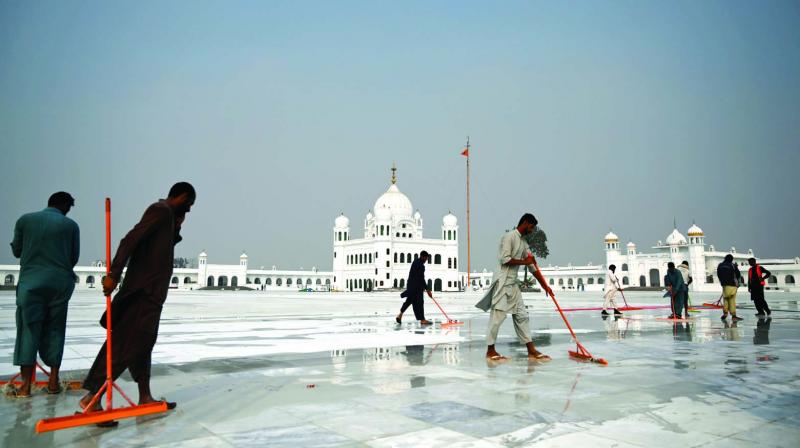 Workers clean the floor at Gurdwara Darbar Sahib in Kartarpur on Wednesday ahead of its opening. (Photo: AFP)

New Delhi/Islamabad: As India and Pakistan prepare to inaugurate the Kartarpur Corridor on Saturday, November 9, the neighbouring countries are also engaged in a war of words. On Thursday, India accused Pakistan of creating confusion by making contradictory statements on the modalities and documents to be carried by Indian pilgrims, while Pakistan in turn accused India of refusing to avail of the facilities offered by it to the pilgrims.

Pakistan PM Imran Khan will inaugurate the historic Kartarpur Corr-idor — the first visa-free corridor between Pakistan and India since their independence in 1947 — on November 9. Former Indian Prime Minister Manmohan Singh, Punjab chief minister Capt. Amarinder Singh, former Punjab CM Parkash Singh Badal, and Union ministers Harsimrat Kaur Badal and Hardeep Singh Puri will be travelling through the Kartarpur Corridor as part of the jatha and attend the inauguration. Giani Harmeet Singh, jathhedar of the Akal Takht, will be the leader of the delegation.

With just a day to go for the inauguration and pilgrims registering in heavy numbers, India said on Thursday that conflicting reports were coming from Pakistan on the travel documents required for the Kartarpur Corridor, leading to confusion and chaos.

“Conflicting reports are coming from Pakistan. Sometimes they say passport is needed and sometimes they say it is not required. As of now, there is a bilateral agreement which specifies the required documents. We will go by that. We have asked pilgrims on our side to carry their passports,” said external affairs ministry spokesman Raveesh Kumar.

Pakistan PM Imran Khan announced last week certain exemptions for Indian Sikh pilgrims, which included an exemption from carrying passports. “For Sikhs coming for the pilgrimage to Kartarpur from India, I have waived off 2 requirements: i) They wont need a passport — just a valid ID;  ii) They no longer have to register 10 days in advance. Also, no fee will be charged on day of inauguration & on Guruji’s 550th  birthday”, Mr Khan had tweeted on Friday.

However, a Pakistan Army spokesman said Thursday that Indian pilgrims travelling through the Kartarpur Corridor would need a passport. This announcement was soon overruled by Pakistan’s foreign office, that clarified Indian pilgrims will be exempted from the need to carry passports, give 10-day prior notice and the $20 service fee on November 9 and November 12 while using the Kartarpur Corridor.

Responding to the MEA’s statement, Pakistan foreign office spokesman Mohammad Faisal said: “As a special gesture, Pakistan announced concessions on the auspicious occasion of the 550th birth anniversary of Baba Guru Nanak to facilitate pilgrims. This has been refused by India in blatant disregard of Sikh sentiments. If India does not wish to avail these facultative measures for pilgrims, it is India’s choice. India is creating confusion to confuse.”

Later, the Pakistani media quoted Mr Faisal as saying the passport waiver for Kartarpur pilgrims will extend up to one year as a special gesture on the 550th birth anniversary of Guru Nanak De.