The blast took place on a bus near Bacheli in Dantewada and multiple casualties have been reported. 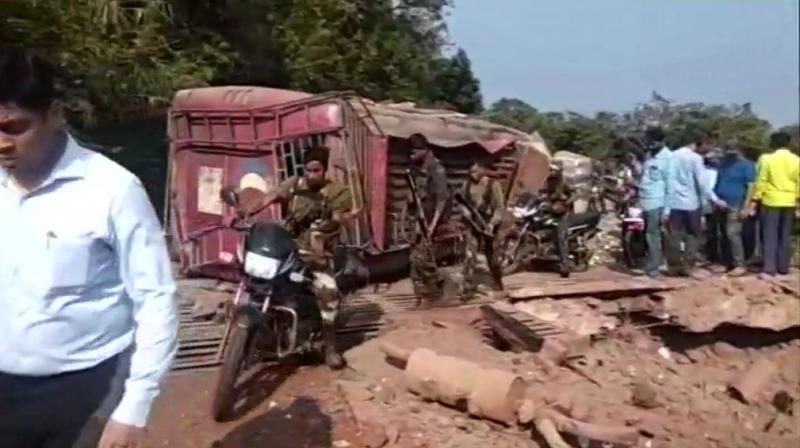 The injured personnel have been shifted to a hospital. (Photo: ANI/Twitter)

Dantewada: Four civilians and a CISF jawan were killed when suspected Naxals detonated a bus with an improvised explosive device (IED) in Chhattisgarh's Dantewada district on Thursday, four days ahead of the first phase of elections in the state, police said.

The blast took place on a bus near Bacheli in Dantewada and multiple casualties were reported.

The explosion took place in a hilly area in Bacheli in Dantewada when the personnel were returning to their camp after purchasing groceries from market, he said. The injured personnel have been shifted to a hospital.

The civilians killed in the blast included the bus' driver, conductor and cleaner, and another person who is yet to be identified, Pallava said. The personnel belonged to a CISF unit that has been deployed in the area for the first phase of the forthcoming polls in the state.

The attack comes before Prime Minister Narendra Modi's scheduled visit on Friday to Jagdalpur district, about 100 km from Dantewada, to campaign for the BJP.

Just a week ago, Maoists had ambushed Doordarshan (DD) crew and a police team in the forested village of Nilwaya in Chhattisgarh’s south Bastar district of Dantewada killing a DD cameraman and two cops.

The three-member DD team was in Nilwaya under Aranpur police limits for election coverage, when armed Maoists opened indiscriminate fire on them.

Assembly elections are scheduled to be held in Chhattisgarh next week in two phases on November 12 and November 20. The first phase is to be held in the Naxal-affected constituencies of Bastar region that falls in the southern part of the state.