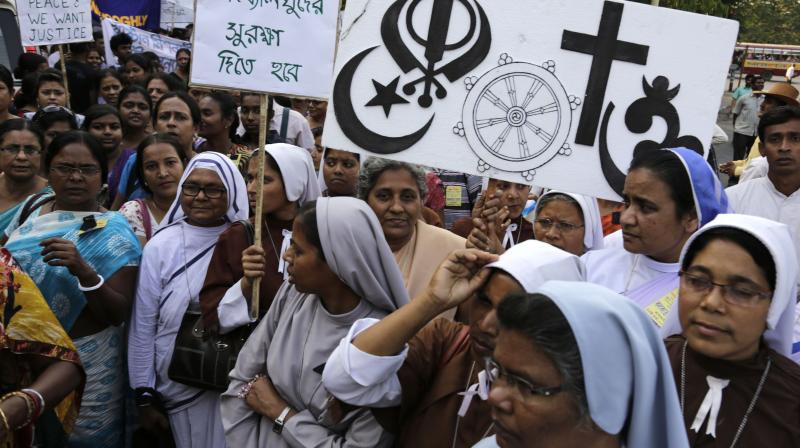 Nazrul Islam, a Bangladeshi national was on Tuesday convicted for raping a septuagenarian nun in West Bengal's Ranaghat town during a dacoity at a convent in 2015. (Photo: AP/File)

Kolkata: A Kolkata court on Wednesday sentenced a Bangladeshi man to imprisonment till death for raping a septuagenarian nun during a dacoity at a convent in West Bengal's Ranaghat town two years back, an incident that shocked the conscience of the nation.

Though the prosecution had accused all the six men of gang rape, the charge was not established and only Nazrul was convicted of rape.

The judge sentenced all six convicts, including Nazrul, to 10 years rigorous imprisonment (RI) for criminal conspiracy to commit dacoity at the convent. They were fined Rs 10,000 each, which if unpaid would entail another two-and-half years simple imprisonment for the conspiracy.

The court also sentenced five of the six convicts, except Gopal Sarkar, to 10 years RI for committing dacoity at the convent and a fine of Rs 20,000 each, which if unpaid would entail another two-and half-years simple imprisonment.

Gopal Sarkar was sentenced to seven years RI for giving shelter to the five other criminals and fined Rs 10,000. If the fine remains unpaid, he will have to undergo another two- and half-years simple imprisonment.

Nazrul, who was also convicted for assaulting a woman and sexual harassment, was sentenced to five years and three years consecutive RI on the two counts and a fine of Rs 5,000 for each of the two charges.

Judge Sinha directed that all the sentences awarded to each of the six convicts would run concurrently.

The court said that half of the fine amount collected would go to the victim and if she refuses to accept the sum, the amount would be given to the convent.

While Nazrul Islam, Milan Kumar Sarkar, Ohidul Islam and Khaledar Rahman are Bangladesh nationals, Mohd Selim Sheikh claimed before the court that he is from Mumbai.

Gopal Sarkar, who provided shelter to the others, is a resident of Nadia district.

While convicting the six men, the court had on Tuesday termed the incident as a matter of shame in a state where Sister Nivedita and Mother Teresa had worked for the people.

They had ransacked the prayer hall and other places in the convent for more than three hours on the night of March 14, 2015 and decamped with cash from the safe of the convent. One accused is absconding.

The trial was shifted from a court in Ranaghat to the Kolkata sessions court in May 2016 by the Calcutta High Court on a petition by the nun.