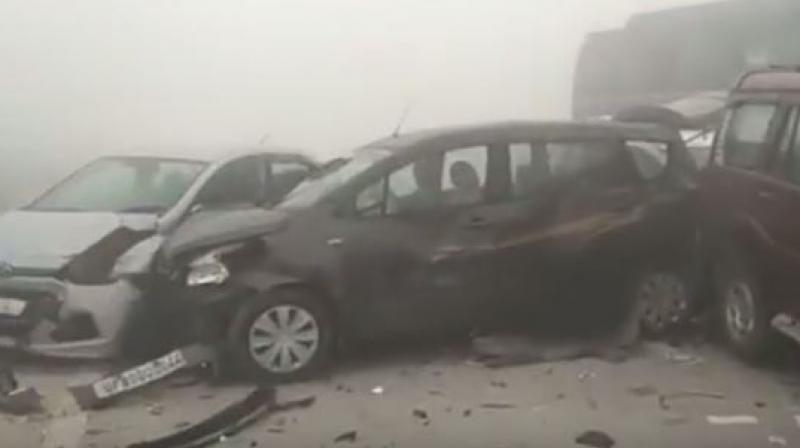 A police officer said, all the injured, numbering around 30, were rushed to Kailash hospital by Expressway ambulances. (Photo: TechGuide4u/YouTube screengrab)

Noida: Around 20 vehicles collided in series at 24 km point on the left side of the Yamuna Expressway leading towards Agra, a police officer said.

"Due to dense fog, a UP Roadways bus en route from Noida to Agra collided with a canter. Thereafter, number of vehicles collided in series," the officer said.

He said all the injured, numbering around 30, were rushed to Kailash hospital by Expressway ambulances.

A doctor at Kailash hospital said, "Six injured persons left for Delhi hospitals on their own against medical advise (LAMA). 16 are still admitted at hospital."

"Bhim Singh, Pohop Singh and Pawan Singh were admitted to ICU as their condition was critical," the doctor said.

Several injured have suffered multiple fractures, he said, adding, around 12 persons were discharged after dressing of minor wounds.

The police officer said, "Though I was appealing the drivers to drive slow due to fog, but still drivers continued driving fast."

"I had stopped and warned few drivers but it is not possible to warn each and every speeding vehicle. People should know that driving in speed in fog is fatal," he said.