The CBI had apprehended the teen, Pradyuman’s senior at school, on Tuesday on the basis of CCTV, forensic and scientific evidence. 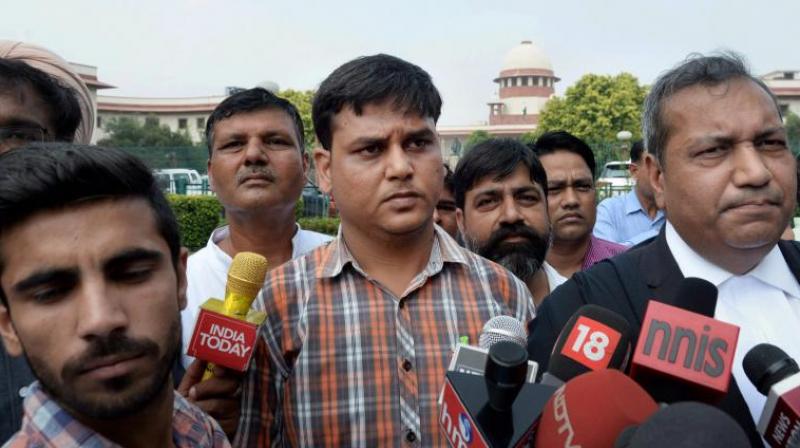 The father of deceased child, also expressed satisfaction with the CBI's progress in the case and demanded that all others involved in the conspiracy be brought to book. (Photo: PTI)

Gurgaon: A Gurgaon court on Wednesday sent a class 11 student of Ryan International School, apprehended for the murder of his junior Pradyuman Thakur, to the custody of Central Bureau of Investigation (CBI) for three days.

Pradyuman was found dead with his throat slit in the toilet of Ryan International School in Gurgaon on September 8. The CBI had apprehended the teen, Pradyuman’s senior at school, on Tuesday on the basis of CCTV, forensic and scientific evidence.

A CBI spokesperson had said that the student, who is about 16 years old, “allegedly committed the crime as he wanted to get a scheduled parent teacher meeting and an examination postponed”.

The investigating agency had sought six-day custody of the teen.

They also expressed suspicion about the involvement of school authorities in "destruction of evidence" and sought that the top management officials of the school be questioned by the CBI in the matter.

"We demand strict punishment for the class XIth student. The (Juvenile Justice) Board also has the option of having him tried as an adult. The CBI has apprehended him based on evidence and we will assist the CBI and the court to ensure he is not allowed to go scot-free, is tried as an adult and hanged till death," Sushil Tekriwal, the lawyer reresenting the victim's family, told reporters.

The family accused the local police of botching up the investigation and said the Central Bureau of Investigatioon meticulously collected circumstantial evidences and facts.

They also alleged a larger conspiracy behind the murder and said that they want the CBI to file a charge sheet soon.

Tekriwal also said that the agency had yet not given a clean chit to the Pinto family, the trustees of Ryan International Group.

"There is a deep-rooted conspiracy that has been hatched on the part of various people including the student who has been apprehended. The legal battle is going to be long but we are waiting for the CBI to file the charge sheet in a time- bound manner," he said.

The father of deceased child, also expressed satisfaction with the CBI's progress in the case and demanded that all others involved in the conspiracy be brought to book.

"The kind of story which had come from the police initially was not believable. However, the CBI has apprehended this class XIth student and the reasons given by them justify it.

"However, all those whose negligence led to my son's murder should also be questioned. They should be given strict punishment so that it sends out a positive message that no one can go scot-free after committing such a heinous crime," he said.

However, the accused student’s parents refuted the allegations and said that their son is being framed.

Following the initial investigation, the police had arrested a school bus conductor, Ashok Kumar, for the child’s murder.

Kumar had even confessed to the crime, but his family and friends maintained that he was being framed.